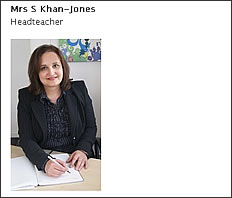 The reasons given are that she “Wishes to be closer to family and work in a city environment.”

The school is run by the Island Innovation Trust which oversees Carisbrooke and Medina.

A spokesperson for the Trust said, “We’re focused on the best for the children.”

A letter will be going home for the parents this evening.

History
Mrs Kahn-Jones joined Carisbrooke High School (as it was then) back in January 2011, as Head Designate for the transition to the new school structure.

More details as we find them out.

Nothing to do with the reorganisation, then..?

Shame, it looked as though she was finally turning “Chavisbrooke” around with her tough, no nonsense policies on pupil behavior. She will be missed.

Not only is she not serving the customary one term’s notice, she is also not in school as of today. This is most unusual.

Makes one wonder whom she upset.

Vote Up00Vote Down
C Hutchings
well she upset me and many others back in September, hence why i went to the county press and IW radio re. her ‘name and shame tactics’, she avoided speaking to me directly, but i did get letters of apology from the governors and herself. I dont think she was right for the school , or if she was she didnt go about taking over in the… Read more »
Vote Up00Vote Down
Mongo

Iâ€™m no supporter, but naming and shaming a bit more often may not be such a bad thing in todayâ€™s â€œno blame and responsibilityâ€ world?

this naming and shaming was regarding those who got A* ‘and those who didnt do so well’ in thier GCSE’s not to do with behaviour or such like, unfortunatly.
and alot of the young people had left school and some had additional needs.

I donâ€™t suppose it really matters at the end of the day, sheâ€™s gone, and the powers that be will only put a positive spin on things, praising achievements, and not answering questions. Oh well, there there, never mind, next please

Vote Up00Vote Down
J
Firstly may I say my thoughts are with those affected, pupil, parents, staff and taxpayers. Irrespective of any reported observations on the suddenness, or any Ofsted inspections, there appears to be a wider issue… â€œWishes to be closer to family and work in a city environment.â€ Do I recall one of the arguments cited, by the LA Chief Exec, for switching to two tier was that it… Read more »
Vote Up00Vote Down
J

The iwcp have now changed their story!

Google for carisbrooke college ofsted inspection , and on page 1 you get the original story:

Controversial head quits
http://www.iwcp.co.uk/news/news/controversial-head-quits-43507.aspx?...
8 hours ago â€“ THE controversial headteacher of Carisbrooke College is leaving just … The school was recently inspected by Ofsted which has yet to issue its …

I’m confused about what has changed in the story. I did the google search and CP comes up on second page but is the same as the current piece. What have I missed.

When the iwcp started the coverage they included:

“The school was recently inspected by Ofsted which has yet to issue its â€¦[report].”

That text was then removed and they carried the story along the lines of the statement from the trust.

Googling finds the above text, but if you click the link it gives you the current version. Not sure if it is cached anywhere.

Interesting, thanks for that.

CP has explained at end of the article that confusion about Ofsted arose because the school had recently used Ofsted-style forms to gauge parents’ views of the school.
http://www.iwcp.co.uk/news/news/controversial-head-quits-43507.aspx

Vote Up00Vote Down
Carolyn sibley
I am not surprised that there are on-going difficulties in these huge secondary schools. I believe Sandown is now one of the largest schools in the UK. Large institutions are not good for staff or students, and movement across different sites is stressful and time wasting for all. When are the staff going to have support and training for their new roles, ex middle school staff and… Read more »
Vote Up00Vote Down
Andrew. Non

As a former student of CHS now at university I can’t say I’m disaappointed in her departure. She was completely wrong for the school. In her first week of appointment as acting head she insisting on wearing her graduation gowns to ‘inspire’ us. This was completely the wrong approach and alienated many students. Bring back Jeeps!

As a parent who has had his child excluded without the right to challenge the evidence used against them, I have say that she clearly wasn’t in charge of the ship, but doing her thing regardless of any due-process. Too late for my child, but hopefully a good outcome for those kids going there in September onwards…