Strong criticism from the Bembridge Library Users Group against the council and their plans and process of library closures. Ed 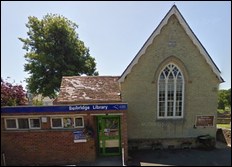 Campaigners fighting to keep Bembridge Library open have welcomed the Isle of Wight council decision to retain the existing opening hours up to the end of September.

However the Bembridge Library Users Group says deep concern remains over a number of issues including the terms of a draft lease prepared by the Isle of Wight Council and the fact that no written indemnity against prosecution under current employment legislation has yet been received despite a promise received more than two months ago.

Volunteer training programme progressing well
BLUG chairman, Keith Fagan, said however that both the group and council officials had been working hard to secure an agreement.

“Our volunteer training programme led by BLUG’s volunteer co-coordinator Peter Pickworth is progressing well thanks to the support of trainers provided by the council and with the help of the Isle of Wight Rural Communities Council, our people have begun IT training and will soon start to shadow professional library staff,” he said.

Concerns over long-term lease
The group has now received copies of a draft long-term lease for the library building in Church Street, which experts are currently examining.

BLUG has already expressed severe concern about the financial consequences of accepting a lease and believes strongly that IWC should follow the growing practice of other councils, which is to retain responsibility and ownership of library buildings, and train volunteers to work alongside existing professionals rather than replace them.

“It’s a practice that has been adopted by a growing number of local authorities and allows substantial financial savings while retaining the professionalism of the full time library staff in the library service,” said Richard Beet, lead author of BLUG’s recent submission to the Department of Culture, Media and Sport. “It allows volunteers to do their job in the library without having to become building services managers, and would help overcome employment legislation issues.”

Council consultation criticised
The 16-page report, complete with nine recommendations, published by the Bembridge Library Users Group (BLUG), criticises Isle of Wight Council for its lack of proper consultation, poor planning, impossibly short timescales to effect a proper transition to the use of volunteers and the financial burdens it plans to pass on to volunteer groups through expensive long-term full-repairing leases.

The report also reveals the total lack of preparedness in a number of areas, including an initial expectation to involve volunteers in carrying out diversity impact statements.

The council should have legally carried these out over a year ago when council leaders revealed their plans to close libraries, including Bembridge.

“The closure of Bembridge Library would have a devastating effect on our village and surrounding communities,” explained BLUG chairman Keith Fagan. “The library is the cultural hub of the village and shares the building with Bembridge’s only museum, the Bembridge Heritage Society. If the library were to go, the museum would almost certainly be lost.”

Unnecessary speed of closures
The report also revealed that IWC was on its own when it comes to the speed at which it has been trying to close libraries.

Said Richard Beet, “Our research revealed that a number of other councils wanting to save money are giving volunteer groups up to three years to make the transition, by working in partnership with professional library staff, and by retaining their services to support volunteers.

“Other councils will retain full responsibility for library buildings, giving volunteers the chance to work in the libraries without the financial worry of maintaining and servicing the buildings in which they work. They currently do not expect this of their own paid professionals, so why should they expect it of volunteers.”

Aim is to retain library
BLUG chairman Keith Fagan said: “Despite our criticisms, our over-riding aim is to retain the existing library. To that end we continue to talk with the council to secure a mutually-satisfactorily resolution.”

For queries relating to the Bembridge Library Users Group, or for a statement, call the chairman, Keith Fagan on 874879 or email [email protected]

how can local residents be expected to find the money for the upkeep of these libraries for years to come, when the iw council state they havent the funds, and they are the ones collecting all the council tax, doesnt seem right.

thats particularly true when town/parish councils are taking larger precepts which will be used to finance “community ” libraries, meaning that we are paying twice for the same service

… and that the law requires the Isle of Wight Council to provide a comprehensive library service. The failure to complete individual equality impact assessments for each individual library that they plan closing indicates that the IW Council have not looked at the impact upon Bembridge users, or users in the other areas that are having local library services withdrawn.

Vote Up00Vote Down
rosie
keep your eyes open,,,urgent message to all library users; apparently the council are for the next month leaving forms in the libraries for everyone to fill in, only last time the consultation papers were hidden.. this is an equality impact assessment ; this is very important, everyone must give their own specific opinion on how this would effect them if their library were to close, or be… Read more »
Vote Up00Vote Down
Asite 2c

This is revealing Annie and more proof of this Council’s incompetance and arrogant approach to local decision making.

Without considering public opinion, they are pushing through a number of decisions which were never mentioned in their 2009 manifesto. I find this disturbing, deceitful and dictatorial.

Apologies. My comment should have been a reply to Rosie.