Portrait by Isle of Wight photographer on billions of £10 notes

Amazing! For 15+ years you, and most of England, walked around with a portrait taken by Isle of Wight photographer in your pocket – on a £10 note. 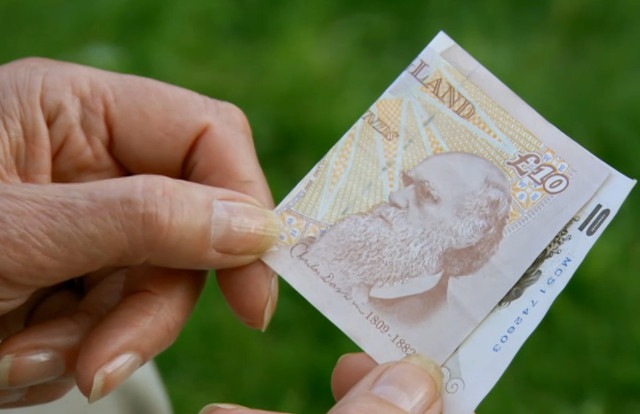 An Isle of Wight Hidden Hero was featured on national TV last night, as Penelope Keith travelled to Freshwater for the start of her new series, ‘Penelope Keith’s Coastal Villages’. During a tour of Dimbola, now a wonderful museum and galleries, Penelope revealed the little known fact that it was Julia’s portrait of naturalist Charles Darwin that was used on the old £10.

JMC on the £20 note
A campaign for Julia to be selected for the new £20 was launched a couple of years ago, but was sadly unsuccessful with the author, Jane Austen being chosen for the polymer £20 instead.

Speaking to Gail Middleton, who was involved with the campaign, she told News OnTheWight,

“Julie Jones-Evans contacted the Bank of England and they confirmed that Julia’s portrait of Charles Darwin was the one used on the ten pound notes. It was rather lovely as it was on Julia’s 200th birthday as well.”

So although Julia was not chosen, in fact her work had been featured on billions of £10 notes for the last 15+ years. If you missed the programme last night, you can catch Penelope Keith on the Isle of Wight from around 25 minutes into the programme.

newest oldest most voted
Rowan
Nothing wrong with Jane Austen on bank notes! It’s good to have Julia Margaret Cameron recognized more though. And how many people know that it was here on the Isle of Wight that Charles Darwin wrote the first chapter of The Origin of Species? There are many books about Darwin (including some excellent ones and some abominable ones) but a good place to start is Janet Browne’s… Read more »
Vote Up20Vote Down