The council are actively pitching around for ‘partners’ to take it over. What’s unclear is why this is happening when the Friends of Dinosaur Isle have been trying to take it off the council’s hands for eight years. 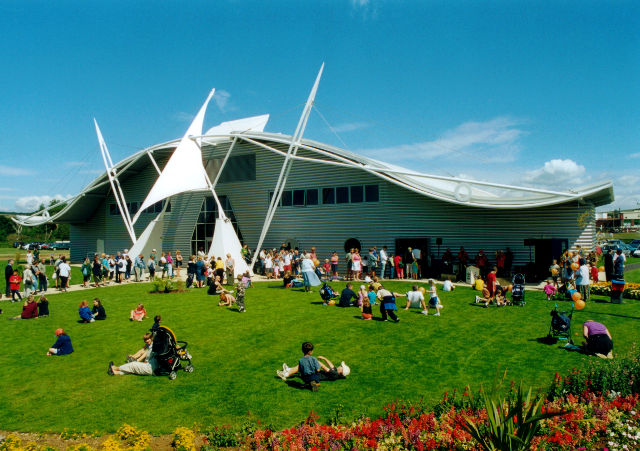 The Isle of Wight council are looking at their future involvement with Dinosaur Isle museum in Sandown.

In a quiet way – there have been no general press releases – the council has organised an event next Tuesday that they’re labelling a ‘Soft Market Test Event’. Surprisingly, no tickets are available for the event, only the offer of a waiting list.

The event’s marketing blurb says they, “will shortly be seeking a development partner or consortia.” The write up continues, “In due course, we intend to run an open competitive process to select a preferred partner (or consortia)”.

Readers might remember this ‘preferred partner’ process was used for the disposal of Ventnor’s Winter Gardens and Ventnor Botanic Garden.

Having another go
The disposal of Dinosaur Isle was first raised in 2010 during the last Conservative administration at County Hall. This was shelved in the run up to the 2013 local elections and remained so during the rule of the Island Independents.

It’s now back in full swing with options being explored under Dave Stewart and his Conservative administration.

The Friends: Eight years of discussion
It’s not like there haven’t been any offers to take Dinosaur Isle off the council’s hands.

The Friends of Dinosaur Isle – a set of knowledgeable Islanders who are passionate believers in the value and future of the Sandown-based museum – have been trying since the original threat to sell.

Knowing of the threat of disposal, the Friends have been in discussion with the council for eight years in an attempt to protect this asset for future generations of Islanders.

As yet, even after all of this time, the council hasn’t allowed this to happen. OnTheWight has asked the council why this is and we’ll publish their response when they reply.

World-class collection
“We have a world-class collection,” Dr Jeremy Lockwood, Chairman of the Friends of Dinosaur Isle and research associate with Southampton University told OnTheWight, “We’ve had such a strong response from people on the Island – Very positive.”

“The loss of accreditation can have a profound effect on the council getting charitable funding in the future,” Pam Ash, a committee member of the Friends told OnTheWight.

Dinosaur Isle history
Dinosaur Isle was completed in 2001 – it was the first purpose-built dinosaur museum in the UK.

It cost £2.7m and was enabled by a lottery grant from the Millennium Commission.

Isle of Wight: Top Dino location
The Isle of Wight is highly regarded in the dinosaur world.

newest oldest most voted
dinochick
Dear Isle of Wight, I came all the way from America specifically for this museum and the footprints and had a FANTASTIC four days on your lovely island. I spent lots of money and will be back. In addition I have been raving to anyone who will listen on what an experience Isle of Wight is. Please keep this in mind as you consider the fate of… Read more »
Vote Up60Vote Down
steephilljack

Dinosaur Isle attracts many tourists to the Island and is a great asset for Islanders as well, especially kids. “Selling off the family silver” is exactly right.
What we need is a change of Conservative control of IOW Council, change of MP and change of government !

It’s my understanding that although the IWC own the building, they do not own the bigger percentage of the exhibits as these are privately owned.

Therefore, if the owners do not like who the IWC sell Dinosaur Isle to, there’s always the possibility that they remove all their items. Making it a less attractive purchase.

Vote Up40Vote Down
Rowan
Please share this article widely. And if anybody knows any of the Conservative councillors and could persuade them to stop this vandalism, and instead to let the Friends set up a trust to ensure the museum’s future as a proper museum, please talk with them! It’s appalling that the Island is once again being run by philistines who think only about money and have no respect for… Read more »
Vote Up30Vote Down
electrickery
The Lottery Grant repayment must be clarified (by whom?) and if it turns out that it cannot legally be sold then IWC do not need any bidding process. It can be transferred to a suitably-constituted Trust or CIC whose objectives are consistent with those in the grant application. Of course, the new operators will have to be convinced that they have a going concern in order to… Read more »
Vote Up30Vote Down
alisonjane

So the Conservative Administration, only six months in are picking up where they left off in their last term of office. ‘Selling off the family silver.’ What a surprise!
The Isle Of Wight Dinosaur Museum was funded with a lottery grant, how can they sell it off?
‘Shelved in the run up to the 2013 Local Elections,’ but now back on their agenda.
Unbelievable.

Vote Up20Vote Down
76offset
So here is a realtime example of how the oft quoted ‘Vision’ for the shape of Isle of Wight visitor attraction evolves. Maybe the council could outline how or what they envisage to enhance this wonderful unique enterprise on top of the status, reputation and accolades that it already enjoys,(without IW council help). The most likely outcome no doubt,the annexing of land for development, invariably for accomodation… Read more »
Vote Up10Vote Down
alisonjane

Steeplehilljack, the Isle Of Wight residents, + the rest of the country, had precisely that option only six short months ago!
You could paint a donkey blue + it would still get voted in!

Vote Up00Vote Down
henrydog
Why do people assume that they are the only ones who know best about Politics? People on the Island probably vote for the party that will represent them and their interests best. If they vote for a party to take power then that is their freedom to do so. Because alisonjane thinks differently then she needs to encourage enough people to vote her way not disparage people… Read more »
Vote Up1-4Vote Down
wellsm

A voice of reason for a change, henrydog you are right on both counts.

Vote Up1-2Vote Down
catowner
But thats just it – IS it losing money? The tories havn’t bothered with any sort of transparency, not even a simple press release. They are once again using the devious and underhand Preferred Bidder method to dispose of assets owned by the taxpayer. They have not released the criteria for a bidder to be preferred, or what they expect from any deal. Once again, it seems… Read more »
Vote Up20Vote Down
Caconym

The problem is that people tend to vote for their, short term, best interests, not the long term future of this island.

Why should they care that they are voting for a party that favours the rich and retired over the poor and working age? They are neither poor nor working age.