As the winds were whipping around this morning, these photos by Richard Cattle show two men trying to secure the equipment and newly-relaid pier decking 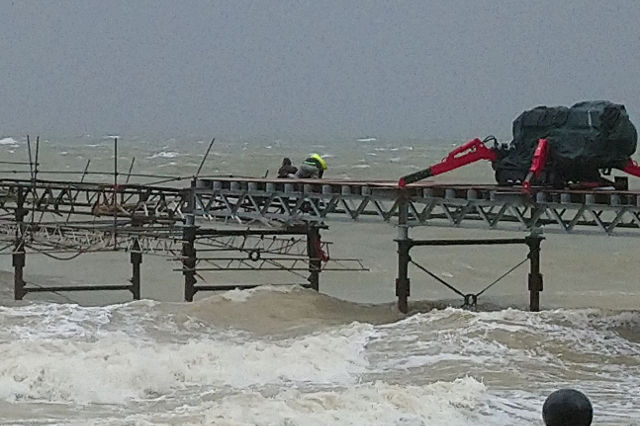 These dramatic photos of workmen on Totland Pier were taken by Islander Richard Cattle this morning (Saturday) and sent to OnTheWight.

As Richard describes it, the ‘crab’ type machine has been on the pier for a while, being used to rebuild the pier after being left for a long time to deteriorate.

The winds and the waves were pretty hectic in Totland.

Secured machinery and planks
Richard initially saw the workmen securing a cover over the ‘crab’ to its legs. They then went to the far end of the newly-attached pier flooring (as can be seen in the photos) and were seen securing this. They kept returning to the ‘crab’-like machine to check it was secured.