El Toro Contento: A Little Slice of Spain in Ventnor

Tomorrow sees the opening of a new Tapas bar in Pier Street, Ventnor. We went along last night to the opening party and were really impressed with the food, service and atmosphere.
On the menu will be lots of different options … Basque pintxos (these are …

Tomorrow sees the opening of a new Tapas bar in Pier Street, Ventnor. We went along last night to the opening party and were really impressed with the food, service and atmosphere. 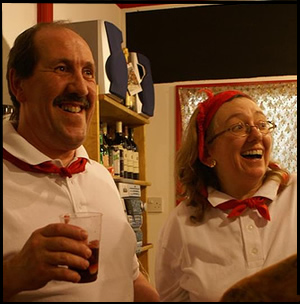 To wash it all down you can choose from one of the many Spanish wines, Spanish cider, imported directly from the Basque country, Estrella Dorada (Spanish lager) as well as Ventnor Brewery Bitters, Carlesberg, Tetleys all on tap.

Lorraine tells me that they are also going to make a really yummy West African ginger drink, which doesn’t have much to do with Spain except that half of Gambia now lives in northern Catalunya! It proved to be very popular in their previous bar, made from grated ginger, muscovado sugar and lemon juice, no alcohol. 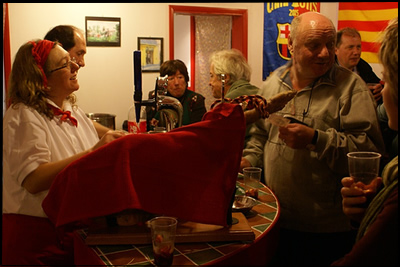 There is also an espresso machine, with decent fair trade coffee, as well as tea and chocolates. The bar will be strictly non-smoking! A great decision given the size of the place and gets people prepared for the upcoming total ban on smoking in bars and restaurants.

Serafin previously worked as an international lorry driver, whizzing around Europe for the last 10 years with a trailer full of cars. Now he’s in the kitchen at the Wight Mouse (since he arrived in April), and Lorraine has been working as a chef since she arrived with their kids in July 2005. She’s worked at Dimbola Lodge, Bonchurch Manor Hotel, The Grange (holistic breaks, Shanklin), and the Palm Court Cafe at the Botanic Gardens.