The Sandown Rivoli Cinema is not only a great piece of architecture, but also an important piece of Island Heritage. Find out how you can help save it from demolition. 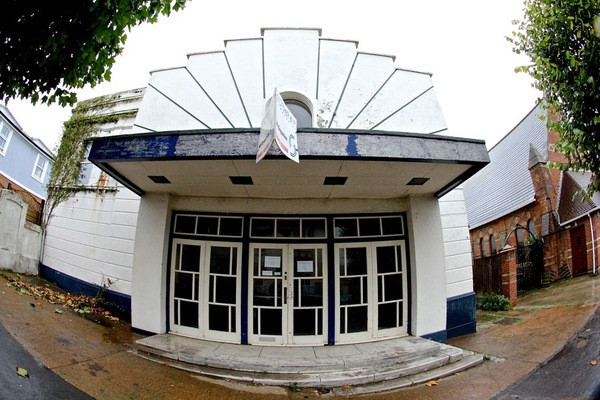 Founder and director of the Isle of Wight Film Festival, Bruce Webb, has today launched a crowd-funding campaign to save the old Rivoli Cinema in Sandown, one of the oldest in the UK.

Sandownians will know that the cinema has not been used as a cinema for many, many years and that plans are due to be submitted in January to demolish this important piece of Sandown heritage and replace it with new housing.

Offer accepted on the building
Bruce is passionate about saving the cinema and making sure the next generation get to experience it too.

“For many years I have looked at the Rivoli Cinema in Sandown and fallen in love with its bold art deco design. Always wondering what it looks like inside and wishing I could buy it and re-open it.

“The cinema came up for sale last year and I finally got to see inside and I was gobsmacked. It was like finding a rare old classic car in a barn. The projection room, the bar, the raked flooring for 500 seats, the screen frame and the fire exits were all intact.”

Bruce has made an offer on the building and the owner, who is keen to support the campaign, has generously given him until January 2014 to come up with the cash.

He plans to reopen the cinema showing the latest movies at the weekends and holidays, and art house cinema during the week. They’ll also be room for other things such as theatre and sports events.

Save it from demolition
Bruce says,

“With your help you can save the Rivoli Cinema from impending demolition – local Councillors have demanded the lifting of a conservation order on the building and there are plans going in at the end of January to have the cinema demolished and flats built in its place.

“I believe the building is more than fit for purpose – the roof is in good shape and the building has not been over developed inside, so its perfect for a re-launch.”

How to get involved
So passionate about this cause, Bruce is selling everything he owns to secure the building, but has a shortfall which he’s hoping the crowd-funding can help with.

“The money raised will firstly go into saving the building from demolition. Then the remaining money with go towards buying new seats, fitting out the foyer and bar, putting in digital projection for 1st run movies and decorating and fitting out the auditorium back to its art deco resplendence.”

What you get
As with all crowd-funding schemes, when you donate to the cause you get something tangible back in return (as well as the warm fuzzy feeling that you’ve helped save a piece of Island heritage).

Donations range from £15 – which will go towards the projection gear – and in return you get two free tickets to any screening of your choice.

There are a number of packages available right up to £4,500 – which gets you big screen sponsorship for five years.

To find out more check out the Indie GoGo page set up by Bruce and see how you can help.

Spread the word
If you can’t donate any cash, please help by spreading the word. Bruce and his team have 60 days to raise £250,000.

newest oldest most voted
kevin barclay-jay
Well worthwhile scheme to retain an iconic building which has a lot of life in it. The Lifting of the conservancy order on Sandown is more to allow developers with long term derelict buildings associated with tourism to be able to redevelope their sites with restriction to their use the same as it was before…these buildings add nothing to the character of Sandown and should go… sign… Read more »
Vote Up00Vote Down
Rowan
Sorry Kevin, but I don’t understand how your petition would help. Surely if the cinema were listed then it would be harder for anybody to demolish it. Of course buildings which are listed or in a conservation zone may suffer because it will cost owners more to repair or adapt them to the high standards required (a classic case of unintended consequences). But that doesn’t mean we… Read more »
Vote Up00Vote Down
helen
OMG…I am SO SO chuffed that this is being planned WELL DONE. As an island girl I was privileged to use this cinema when I was a little girl and it holds a special place in my soul x Money wise – I’ll have to consider what I can afford, but whatever I can do to help…even just spreading the word I WILL! WOW…made me smile x… Read more »
Vote Up00Vote Down
Bruce Webb

Thank you Helen for your comments – we feel its special too and want to see it used again for people to have a great night out. The owners have been brilliant at helping us turn this back into a cinema and dont want to see it demolished but are stuck with a difficult decision – but with your support it will rise again :)

What is wrong with Sandown? It hasn’t got much going for it but what it does have is some beautiful historic buildings, like this and the Grand, which should be treasured.

Thankfully the Grand has a reprieve and what is needed is more people with the foresight of Bruce. Bravo Bruce.

The grande is not so grande and past its sell by date…NOBODY is going to save it…it will stand…like the Savoy, in rack and ruin until it falls down.

Lack of foresite from planning yet again… these two properties highlight the problem in Sandown….some need preserving and being put into use, others need to come down yesterday

No wonder you got Blezzarded kev, the Grand is a jewel

Come on chaps, less argy bargy and more talk about trying to get this building back into use for Sandown… and of course get people coming to the town for entertainment. All the buildings which are out of use have a future if we just think positively about their potential.

Vote Up00Vote Down
iowentertainer
Bruce, have you thought about pitching this to a TV documentary production company, they are always looking for interesting stories. The BBC strand Storyville does some excellent ones, they filmed ‘the great British holiday’ here on the island a year or so ago around the Whitecliff Bay area. Here is a link I found http://www.bbc.co.uk/commissioning/whos-who/tv/knowledge/documentaries-1/nick-fraser.shtml , other alternatives may be the likes of the Restoration Man series… Read more »
Vote Up00Vote Down
Cynic

Now that Bogey’s has gone, how about turning it into an Art Deco restaurant and nightclub specialising in jazz bands playing 1920s-40s music?

It would be different and there is plenty of free parking after 6pm in the carpark by the Con Club.

And well done for wanting to keep it as a cinema. I recently borrowed Mark Kermode’s ‘The Good, the Bad and the Multiplex’ from the library, and one of his main points is that what British cineman needs most is good independent cinemas who will show good films, not just the usual blockbuster rubbish.

Wish I could help, but I just don’t have any spare money.

Vote Up00Vote Down
terry swoffer
GREAT to see what could be done with this slumbering gem, turn it into a full functioning cinema. If I lived in the area I would lend more physical support to the cause. I happened upon this cinema while walking through the town a year ago but was not sure what it was at the time. GOOD LUCK, hope this works. Contact the Cinema and Theatre Association… Read more »
Vote Up00Vote Down
septua
Bruce is to be commended for doing his best to save the Rivoli cinema, and I would certainly be prepared to make a contribution towards purchasing and renovating it. However, what concerns me is the future ownership. As I read it (and please forgive me if I have got it wrong) Bruce is proposing to buy the cinema and is asking the community to put up money… Read more »
Vote Up00Vote Down
tryme

That sounds like a good idea, septua. It hasn’t felt quite usual that we would be donating money towards a privately owned property.

Vote Up00Vote Down
Bruce Webb
Hi Tryme, thanks for the commenting. The crowd funding campaign is to buy seats and tickets and other perks, not to just buy the building, if you would like to help buy the building please get in contact with me. See this as a public subscription – something which was very common the Island many years ago and lots of buildings which were open for the public… Read more »
Vote Up0-1Vote Down
Steve Goodman

Who owned the Frank James at that point, Steve?

Septua’s reference to a ommunity trust as at Shanklin Theatre, sounds interesting.

Love the thought of there being a Rivoli cinema.

Vote Up00Vote Down
Bruce Webb
Hi Septua. I am signing an agreement with the owners not to sell the building on (within a given amount of time)and develop it into housing. In return I am getting the building at a good price. If you are concerned about giving money to a privately owned building please do have a look at the crowd funding site and there you will see you are pre… Read more »
Vote Up00Vote Down
laurie
All hail Bruce! It’s about time that the Island celebrated its modernist architectural gems. Supporters of the Rivoli will want to know about a special fundraising event on Sunday November 17. Clancy’s in Sandown High Street will host an all-day music event, featuring live jazz, soul, funk and blues. The event will start at 1 p.m. and run throughout the day. Entrance is free but attendees will… Read more »
Vote Up00Vote Down
luis silva

Hi there, I live in Sandown and I was projectionist for 12 years, If anybody need help. Please feel free n contact me.