New floating bridge being attached to the Isle of Wight (photos)

After all of the build up, the new Floating bridge is currently being attached to its chains on the East Cowes side. Allan Marsh has taken some great photos of it. 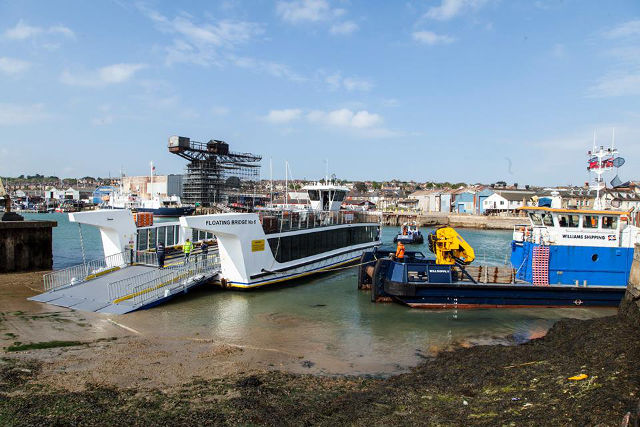 The process of tethering the new floating bridge to the Isle of Wight is underway.

The new floating bridge has arrived in the waters between East Cowes and Cowes, in the waterway where it will live its working life.

Attaching the chains
This morning engineers have begun to attach the chains, starting on the East Cowes side. Tugs are in place to aim the moving of the Floaty.

Allan Marsh, who has many years experience watching the coming and goings of the floating bridge, says that this is unusual as it’s normally done from the other side.

Allan has been taking some great photos of the process.

What’s different?
As photos of the various stages of the construction of the new Floating bridge have been seen, the impression has been that it was massive, but Allan says, now it’s in place, it doesn’t look that much larger than the previous one.

It certainly appears wider, with four lanes for vehicles instead of three, enabling more vehicles to travel. The length, says Allan, looks about the same as the old one. At low tide it stretches a quarter of the way across the river, if that.

Foot passengers only go on one side of the craft now – Looking out to the Solent, so on the right hand side as you look from East Cowes. They’ll have the option of a higher deck as well as the glass-lined lower deck. newest oldest most voted
eastcowes
Still looks longer, and did from the vehicle ferry the other day (may be an optical illusion that it appears the same size due to the glass and width). I also looked at it a few minutes ago and it seems to stretch further out if you look at the tips of both prows (not the body) than what Allan thinks, though I appreciate his experience (and… Read more »
Vote Up00Vote Down
eastcowes

And nice photos, Allan! As always…

Vote Up00Vote Down
eastcowes
Also, Allan, it’s neap tide right now and so the tide is not very low at all as you know. The bridge prow to prow will be interesting to see when we have the worst tides. Can you take some photos next springs for us? They also won’t be the lowest of lows until we get to the equinoxes again anyway, and we are too close to… Read more »
Vote Up00Vote Down
tosh

Chained to the Island by her own fixed link and she looks perfectly happy.

There’s a fantastic, high quality streaming webcam of the floating bridge on camsecure (‘river medina’) – it’s been going back and forth for hours

Great webcam!! I’ve traveled on the floating bridge for over 70 years, (not continuously you understand), and I’ve always wondered how they connect it to the chains but I’ve never seen it done.