Following his own recent experience, sceptical science writer Richard Cattle is calling on anyone who has seen or taken photos of the Stone Age ghost of Mottistone to get in touch 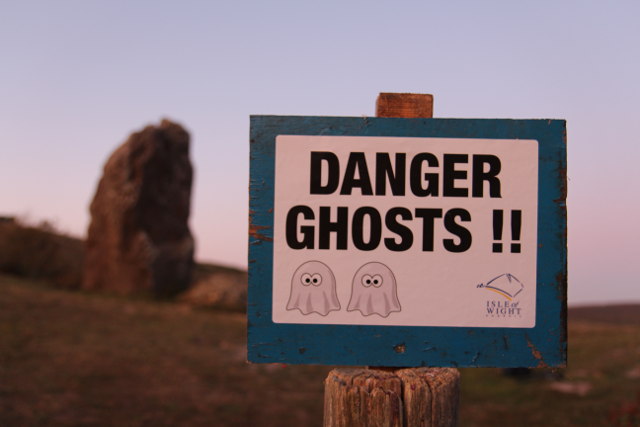 Richard Cattle shares his experience of the ‘Stone Age ghost of Mottistone’ and asks others if they’ve seen the same. In his own words. Ed

Being a sceptical science writer on the Island, I’m often asked to investigate strange phenomenon, to get to the bottom of things and calm peoples fears, which sometimes is met with somewhat mixed feelings. Only this time I’m baffled to come up with a logical explanation of something that happened to me on an investigation.

After following up on reports of brief fleeting sightings of something ghostly happening at the Island’s Megalithic site known as The Longstone at Mottistone, I couldn’t resist going there myself.

Calm and relaxed state didn’t last long
I arrived at the site after an enchanting stroll through the winding countryside paths beautifully maintained by The National Trust.

With thoughts on my mind of my previous case, ‘The Totland Fog Monster’ I paused to take in the stunning views of Brighstone down as the sun began to set obscured behind the trees surrounding the various burial chambers in the area. I felt calm and relaxed, but things were about to change.

It felt like someone was watching me from the side and as I dared to turn I started to hear what I thought was a dog barking followed by the sound of a gruff voice saying something like,

Shape began to materialise
I could see a shimmering shape begin to materialise in front of me, so I grabbed my phone to take a picture and video the event, but after taking only one shot the sound of a low battery warning could be heard, and to my dismay my phone lost all power after being fully charged just moments ago!

Suddenly within just a few seconds the apparition faded and the strange chants were replaced by the sound of crickets chirping. I wanted to analyse my data as soon as possible so I left the site and headed home to charge my phone and calm my nerves by listening to something logical. I chose The Infinite Monkey Cage.

Fortunately once my phone had been charged the picture was recovered and the next day I took a print to seek advice from those in the know.

Consulted with Stone Age Museum
After consulting experts at the Visit The Stone Age museum at Wayside Herbs at Yafford, they agreed that the ghostly image could look like that of a neolithic man from around six thousand years ago.

I am currently very busy speaking to other witnesses, with less scepticism now of course, and would welcome any other pictures the general public has to offer.

Get in touch
If you have any pictures of the stone age ghost of Mottistone please don’t hesitate to email them to OnTheWight.

Hopefully this apparition can be studied and become a repeatable observation on the Isle Of Wight.

Not unusual at this time of year that the temperature would drop sharply at sunset at an exposed site…I am not a sceptic by the way.

Telegraph: Folklore is dying out due to rise of social media, National Trust warns