Islanders came together on Saturday to find out more about the possible impact of fracking and to share their concerns.

Read and contribute to the 35 readers' comments ↓ 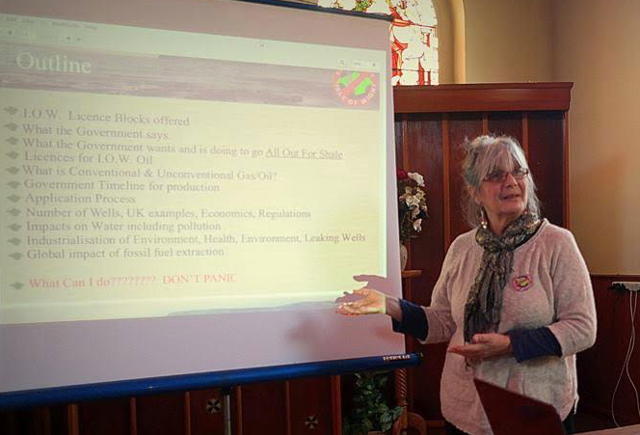 Thanks to Morgan for this latest report from the Frack Free Isle of Wight group. Ed

More than forty Islanders came together on Saturday at Newport’s Unitarian Meeting House to learn more about the prospect of oil and gas drilling (fracking) on the Island and how such projects might be stopped.

The public meeting was hosted by Frack Free Isle of Wight, a group of concerned local residents united for a just, sustainable and climate-stable future for the Island.

Public concern has risen
Following the announcement of an oil exploration license being awarded to UK Oil & Gas Investments PLC (UKOG) in December, public concern and discussion of the possibility of fossil fuel extraction on the Island has risen.

“Unconventional oil and gas extraction has not been proven safe, infact time and time again it has polluted, disrupted and ruined people’s health and wellbeing.

“The Island is a particularly sensitive place, with unstable geology, fragile habitats and unsuitable infrastructure, we simply cannot allow it to happen here.”

The public meeting offered the opportunity for concerned Islanders to ask their questions about the proposed drilling, as well as learn some of the scientific, economic and social arguments against such projects.

Next event
Frack Free Isle of Wight also announced “Isle of Wight Line in the Sand”, an event on January 31 from 10-11am at Hanover Point Car Park at Compton Bay.

With this friendly and symbolic gathering open to all the group aims to gather as many Islanders as possible to show solidarity in the fight against fracking globally, and to demonstrate that they will oppose any attempt to drill on Isle of Wight soil.

Impact of fracking
For Sue Painting, and her husband Steve, residents of Totland Bay, the meeting brought to light plenty of new concerns,

“Had we known that the area we have moved to may become an oil or gas field, we wouldn’t have spent nearly £1/2 million on purchasing property here.”

“We moved here 12 months ago to enjoy the beautiful Island and had no idea about the possibility of drilling here. To think we could have a well of any sort on the Island is heartbreaking.”

The topic of oil and gas extraction is on this week’s Isle of Wight Council meeting agenda.

newest oldest most voted
Luisa Hillard
As far as I am aware there has been an oil well on the Island for quite some time. I am of the opinion that government should stop subsidising the fossil fuel industry and put some real effort into promoting real energy security for the country through renewables. We have an unsustainable energy economy which will crash and burn unless we re-evaluate but that would mean a… Read more »
Vote Up10Vote Down
mark smith

They already know what Oil out there. A Oil survey was done 15 yrs ago. It was mainly to do with Witch Farm Oil well. Quite simply they were considering putting a Oil Well near the Island. Reason why they did not drill, it was not cost effective. So why destroy this wonderful Island, Luckily none of it is viable with the price of Oil.

It is worth noting that UKOG have never done fracking and have no plans to frack any of their UK energy discoveries.

Their business plan has always been to adopt conventional energy recovery techniques even though the British government legalized oil and gas fracking last year.

Conventional Oil recovery techniques on the Island? With all the infrastructure, pollution, damage to the environment, trucks, noise etc that would entail? Contributing towards further development of the oil industry when we should be moving away from fossil fuels and investing in cleaner, renewable energy?

Please make up your mind. You don’t want conventional oil recovery techniques with the damage to the environment, trucks, noise etc but you are happy to have wind turbines which damage the environment and create noise. Have you seen the trucks that carry turbines? They are ginormous.You can’t have it both ways.

A wind turbine takes a few days to erect. After that, it can largely be left alone. In contrast, oil and gas energy sites require much more frequent attention, pipework, burn off, deliveries of fracking fluid or trucks to take away the oil etc. The damage done is difficult to compare.

Nope- do not the the turbine itself and vane turning gear need regular maintenance owing to their being surrounded by, and using, winds and spray coming off salt water?

Of course they require maintenance. Just not on a heavy engineering scale (unless there are real issues) requiring trucks etc.

Regarding wind energy today – this is the least windy day in many weeks! That’s why you need a variety of energy sources and investment in storage technology, not everyone working off wind.

Vote Up10Vote Down
A.Pugin
Wind farm support vessels burn around 100-500 litres of fuel per hour, the last windfarm that I worked on required a journey of two hours to reach it at full speed and there were approx 15 vessels being used, daily. The construction of a wind farm is considerably more than a few days and has possible complications involving seabed scouring, silting and tidal interference. They are not… Read more »
Vote Up0-1Vote Down
Cicero

So you agree Vix that “After that (i.e. construction), it can largely be left alone.” is wishful thinking? :-))

I believed we were comparing an oil drilling site on the island to a wind turbine site – as the post is largely about onshore oil (conventional or not). I fully understand the need for servicing and maintenance of wind turbines. But, again, the direct impact on the surroundings is limited in comparison to an oil field and the daily trucks etc that would be required.

Vote Up10Vote Down
Cicero
And the EROEI on the turbines windmills themselves, the construction process, the construction and carbon fuels used craft ferrying the materials and work people, laying the links to the mainland to carrying electricity is much different to a mainland site whether windfarm or oil collection? The threat of fracking will not arise until Brent crude recovers. “A wave of bankruptcies and closures is sweeping across the oil… Read more »
Vote Up0-1Vote Down
Cicero

I see the OTW cowardly cyber-stalker is still active and hiding behind red arrows for most comments! :-))

Many readers prefer not to comment, but will use up or down arrows as their way of agreeing or disagreeing with the comment. It’s not fair to refer to them as cowardly just because they disagree with you.

Sal- I welcome people disagreeing with me as long as they produce a cogent argument for that disagreement..

That is the way we all learn from debating topics.

As usual you are right Sal- I withdraw and apologise for using the word “cowardly”. (My weak excuse is that frustration got the better of me this time.)

Just for the record, at the moment the entire UK “fleet” of windfarms is producing a miniscule 0.35% of our electricity load! You can verify this by visiting this link: http://www.gridwatch.templar.co.uk/ which gives you real time data.

No, I do not support fracking on the IW.

Vote Up0-1Vote Down
A.Pugin
Apologies for the double post, but I have dug out the fuel figures from my last windfarm project. During operations and maintenance (normal running of a wind park) the average daily fuel burn was 52,500 litres in a worst case scenario when WFSV’s were unable to tie off an asset and tur off the engines (we had to operate like this for several years due to legal… Read more »
Vote Up0-1Vote Down
John Nash

Wind now down to 0.14% of load!!!! Will it hit zero? At the same time demand on the Grid is rising on this cold winter afternoon.

Vote Up0-1Vote Down
John Nash
From the inevitable down arrows, it seems that some folk do not like having to consider the implication of the actual data that I have presented. 0.2% of the grid load is two-thousandths of the electricty we are currently demanding from the National Grid. If the output was not being assured by conventional means, the entire UK would grind to a halt. That is the reality. You… Read more »
Vote Up0-1Vote Down
John Nash

Just checked the data again and wind’s contribution to the Grid now stands at 0.11% – that’s one thousandth of the demand we are making for electricity.

Vote Up0-1Vote Down
Frank James
The reality, involving energy demand, supply, pricing, politics, and markets, is complex. There are times, like now, when it’s cold and dark, with little wind and no sun to generate power; but even a thousandth of that demand is still a lot of power. There are also times when it’s sunny, warm, and windy, and more renewable power is generated than consumed. There are many contracts with… Read more »
Vote Up10Vote Down
LisaC

We will never need to be totally reliant on windfarms alone. Norway for example supply 100% of their country’s electricity from hydropower with sufficient left over to warrant building an interconnector so that we can benefit from it as well. http://www.theguardian.com/business/2015/mar/26/uk-and-norway-to-build-worlds-longest-undersea-energy-interconnector

Vote Up10Vote Down
Frank James
1. Lack of precedent does not prevent future events. 2. Plans may change; we also know how people may be economical with the truth, especially in business and politics. 3. The British government also recently agreed at the climate crisis conference that we urgently need to stop the harmful ‘conventional’ carbon energy use and start doing something better, which just seems to be another example of being… Read more »
Vote Up10Vote Down
LisaC
UKOG is not the only company involved, they are in partnership with Angus Energy and Solo Oil, and all 3 talk openly about the unconventional potential of this licence. Whether they would choose to hydraulically frack, use acid jetting or other technologies themselves, or merely sell on to another company remains to be seen. David Lenigas (significant shareholder & previous chairman of UKOG) has always gone to… Read more »
Vote Up10Vote Down
tiki

Only 40 people were concerned enough to attend …..

It wasn’t a protest or a campaign to get as many people along as possible – it was a drop in and information session. There have been regular ones throughout the last 6 months, with different people attending every time.

Vote Up10Vote Down
A.Pugin
I fail to see how a small number of well heads could destroy the island-in fact directional drilling could easily be undertaken from the mainland, leading to the possibility of other local authorities benefitting from the island’s largesse. If a well head were to be established in fawley or other nearby location, nothing can stop the island being drilled…and be aware that oil companies intentionally downplay the… Read more »
Vote Up0-1Vote Down
Cicero

Is not the longest directional drilling record still held by Wytch Farm’s M-11 well that still does not reach more than 10km?

Records are commercially sensitive, and in some areas could cause war (i.e one country exploiting anothers natural resources). The true distances are vastly underestimated.

AP -perhaps not so sensitive- google “longest directional drilling” to see the boasts and look at the one from Wytch Farm posted y BP in https://www.slb.com/~/media/Files/resources/oilfield_review/ors97/win97/ex_drilling.pdf

It looks like 10km is still the limit and so would struggle to reach across the Solent from the mainland to the offshore shale deposits.

I totally take on board what you are saying-but I can tell you that these figures have been far exceeded, although it is not in anybody’s interest to declare this