Pupils from Shalfleet CE School helped the author by giving feedback on her story and illustrations before she published ‘On the Trail of the Missing Pets’, the first in series of fictional adventures set in history. 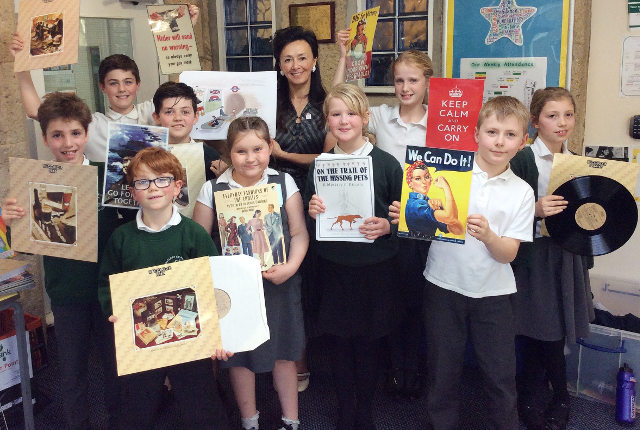 After raising over £5,000 through a phenomenally successful crowdfunding campaign, children’s writer and illustrator Marianne Su Yin is fulfilling her pledge to donate a copy of her new book to every primary school on the Isle of Wight.

Pupils from Shalfleet CE School helped her by providing feedback on the story and illustrations prior to publishing.

The reviews of the Year 4 and Year 5 children who saw the first draft have also been included in the book itself. She has already donated a set of books to pupils and headteacher, Lizzie Grainger, which can be used when pupils are studying ‘Pets’ in Key Stage 1 and ‘World War 2’ in Key Stage 2.

First in the series
‘On the Trail of the Missing Pets’ is the first in series of fictional adventures set in history created to inspire children to read about the past.

The first story is set in 1940’s wartime London with the character of Spike the dog based on Marianne’s own Vizsla.

Over the course of the next two months Marianne has been invited to visit local primary schools to talk about her book and the wartime era.

Launch at summer fair
In celebration of her success and support from local businesses including Freedom Childcare, Inky Ever After Press and Blue by the Sea, Marianne will be officially launching ‘On the Trail of the Missing Pets’ at the Shalfleet CE Primary School Summer Fair on Saturday 24th June.

Readings will take place between 12 – 3pm, plus book signings and possibly even ‘pawtographs’ by the real Spike who hopes to attend.

Live music
To capture the 1940’s theme singers from ‘Company B’ will be performing, a hugely popular Island based close harmony quartet, and they will be joined by Lindy Hop dancers from the Isle of Wight to get the children dancing!

Marianne will also be reading her book and running workshops as part of the Isle of Wight Literary Festival Youth Zone in October. Her book can be bought in paperback and hardback online through her website and she can be contacted here for schools visits.