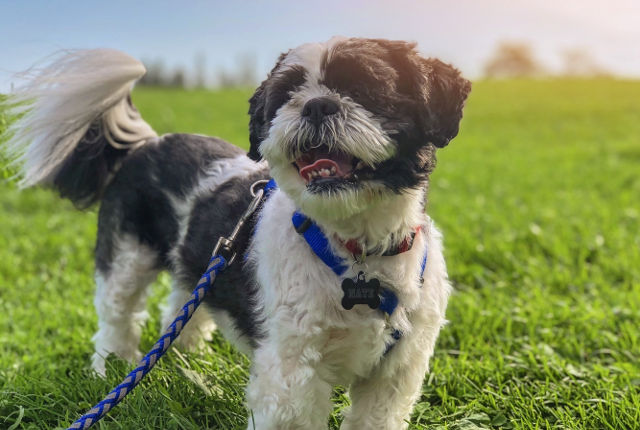 As part of OnTheWight’s digging into the proposed new Public Spaces Protection Orders (PSPOs) the goal has been simple.

Simple goal: Helping the public understand
That very simple goal is – Now the cat is out of the bag about the potential changes of where and how the public can walk their dogs on the Island, let’s try and cut through the confusion and help everyone understand what the change might be.

What is changing with the proposed new rules about dogs on leads in certain parks, dogs being banned from playgrounds and cemeteries?

Public concerns about ‘Dogs on Leads’
In an exchange with the council, OnTheWight tried to get some answers yesterday evening on the ‘Dogs on Leads’ proposal (which is causing a lot of public angst).

The IWC document that OnTheWight published yesterday showed a list of 37 areas across the Island that might become restricted – Places the public won’t be able to let their dogs run free and exercise.

The obvious questions were, what are the differences between now and the proposal and the following very simple request:

I’ve just had a quick look and can see (current) the ‘Dogs On Leads Order’
document, but can’t find which areas this applies to. Any pointers as to where to find the areas they apply to?

(We’ve since found that the current order applies to (i) Each and every length of road including adjacent pavements and verges, within the administrative area of the Isle of Wight Council – so with the council not co-operating, all we can conclude is that those 37 areas are new)

IWC: We won’t tell you yet
What we received wasn’t any useful answers, but a statement from the Isle of Wight council’s press office – which took nearly six hours to prepare – effectively saying, ‘No, we’re not going to tell you yet’.

Here it is in full – an Isle of Wight Council spokesperson said,

“The delegated decision to consult on Public Spaces Protection Orders cannot be taken until after Thursday.  If agreed council officers will then arrange for the consultation to be launched within the following weeks.

“PSPOs are required to be introduced to replace the Dog orders which are no longer enforceable following a change in the law. Extensive consultation has taken place in respect of these orders with town and parish councils, local members, landowners and other key stakeholders. The revised measures being suggested have resulted from complaints from members of the public, for example dogs in cemeteries.

“The information forming part of the consultation will contain full details of the orders, including any new ones (cemeteries and young children’s play areas) and highlight any differences with existing orders.  This will ensure all the appropriate information is released in full, to everyone, at one time, with details on how the consultation can be accessed and responded to. This will ensure all stakeholders have access to the same information, at the same time. There are no plans to make any amendments to proposed orders until after the consultation period when full consideration of any results can be made.”

Final decision in New Year after Consultation
If the Delegated Decision to go ahead with the consultation is agreed, there will be a chance for residents to contribute, including via the council’s Website.

“During the consultation, we will make it very clear what dog control orders are proposed (new public spaces protection orders) and where. We shall explain why and how they differ from Dog Control Orders already in force.

Image: Brady Wakely under CC BY 2.0

newest oldest most voted
bassgurusi
This is yet more smokescreen, evasion and frustration of process by IWC. Tig Outlaw’s statements elsewhere were of accusations of misreporting By the media – ultimately a Trump-esq “fake news” dismissal of concerns and queries raised…. which smacks of arrogance in office to “manage” the voice of those genuinely concerned. But it is clear from the information released that The IWC plans to ban dogs from MORE… Read more »
Vote Up33-13Vote Down
davimel
Just out of interest… Exactly how much revenue or income from fines have the IWC actually collected since the ‘dogs on leads’ farce began. I only ask because I think they got rid of the dog warden service and cannot see who is actually policing this massive issue to the lives and safety of we residents. Do we have secret snoopers in the pay of the council?… Read more »
Vote Up190Vote Down
Benny C
Heaven knows how big a bag we’d need to clear up behind Dinosaur Dave Stewart. Budget control highly questionable, decision making basis unclear and not always properly explained, Leadership skills totally inadequate With Councillors and Officers not being held to account on a transparent basis, opaque excision making processes with cabinet pals behind what appear to be closed doors, Island Roads Contract heading towards an inquiry, chain… Read more »
Vote Up19-3Vote Down
hialtitude

There is only the one public park in Wootton, many elderly Wootton residents exercise their dogs in the park by throwing a ball with a ball throwing gadget.

My dog normally walks at heel without a lead, being nicely behaved, imagine how stupid it would be to go to the park and then have to leash my pet when I arrive!!!

If you read the article above you have just confessed to breaching the existing order currently in force.
There are no immediate changes so surely waiting until after Thursday is no great hardship but, from the amount of notice the Council took over the St. Mary’s roundabout debacle, the validity of any ‘public consultation’ is bound to be suspect.

What are you talking about?

There is currently no order in place for Wootton Park and many people exercise their dogs off lead.

You wrote that your well behaved dog walks at heel and you’d have to put him on a lead when you arrived at the park.
There are several dog owners about the Island who wander round the streets and towns with their equally well behaved
dogs loose.
That’s what I’m talking about but, from your indignation, I take it that wasn’t what you meant?

Vote Up2-1Vote Down
hialtitude
There is currently no byelaw in force at Wootton Park that requires you to have your dog leashed. The proposed PSPO(public space protection order) is a new piece of local legislation. If the IOW council puts this PSPO order in place that requires that your dog must be leashed, then Wootton residents will all be required to have their dog on a leash when on the park… Read more »
Vote Up3-3Vote Down
Benny C

Dave Stewart has tried to explain his plans, and he will go on explaining them until he knows what they are. Hopefully at some point Ian Ward might read them before he votes.

There should be a protection order against the council as all they do is attack us on everything and gives us nothing. Bring on an election

Vote Up30Vote Down
toby
Has anyone thought about this. If we are no longer allowed to let our dogs run free in the parks and recs.and have the exercise they need why would you take them there. You might as well walk along the roads where they are usually on a lead, than take them to an open area where they have always run free and now not let them is… Read more »
Vote Up5-3Vote Down