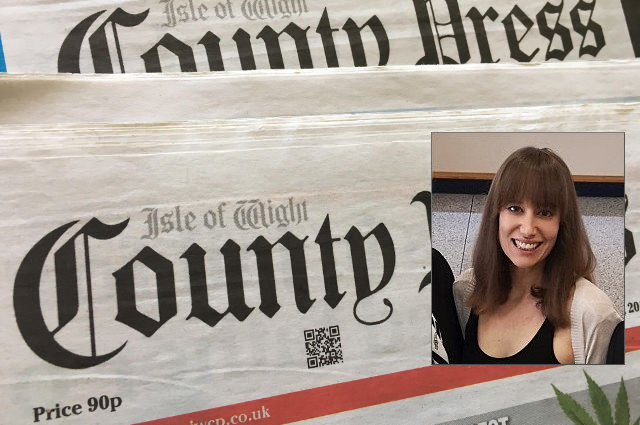 The Isle of Wight County Press is losing their first female editor later this month, as Emily Pearce not only leaves the paper, but leaves the world of news for “a completely different sector”.

Last year Emily became the first female editor of the 136-year-old paper, but after 12 years at the County Press, she has decided now is the time to move on.

Holding power to account and speaking up for Island community
Emily told OnTheWight,

“I’ve absolutely loved working at the Isle of Wight County Press. I joined the paper as a trainee 12 years ago and was very proud to be appointed the first female editor.

“I’ve worked with some incredible journalists over the years, who taught me the importance of holding those in power to account and speaking up for the Island community.

“I will miss it very much, but I’m excited to take up a new role in a completely different sector and I know the paper will be in safe hands under previous editor Alan Marriott.”

Marriott: “One of the best journalists I have worked with”
The former editor, Alan Marriott, who moved into the role of Publisher at the now-Newsquest owned publication “for a spell”, said he was delighted to be returning to his previous role and wished Emily well.

“She is one of the best journalists I have worked with and adapted well to the post of editor.

“She showed great determination in improving our online page impressions to a huge extent.”

Alan returns as Editor from 14th February, when he’ll be supported by a digital content editor.

We wish Emily all the best for the future. We’re sure she’s going to be a great asset wherever she goes.

I too wish Emily every success wherever she goes, but I get the disturbing feeling that all is not well at the County Press.

The problem is that the County Press has gone downhill and now has a large amount of advertising, much for the County Press itself. It used to take me days to read it years ago, but now only one breakfast.

When you have the courage to hold very powerful people to account, you can upset them, and lose your job.

You are right, this stinks

Lovely lady. Hope she does well whatever she chooses to do.

Vote Up24-5Vote Down
Mr Magoo
Gazing into my crystal ball I can see the County Press being relegated to become part of Newsquest Southampton with its publisher adding the Island to his portfolio of mainland titles (saving money). Soon after the iconic Brannon House in Pyle Street, Newport, will be regarded as under used and therefore too costly and what’s left of the County Press staff (once around 100) will be moved… Read more »
Vote Up14-1Vote Down
hialtitude

No closing editorial which is not what I would have expected.

Vote Up110Vote Down
Mr Magoo
So boomerang editor Alan Marriott says the County Press is recruiting a digital content editor to the editorial team but I cannot find an advertisement anywhere for the job. Does he mean will be recruiting? If so, that suggests these ‘changes at the top’ have not been planned over time but are instead hasty or panic measures by Newsquest. These changes are happening two weeks from now.… Read more »
Vote Up9-1Vote Down