It’s described as a vertigo-inducing climb and has made the top ten of best open-top rides in the UK. 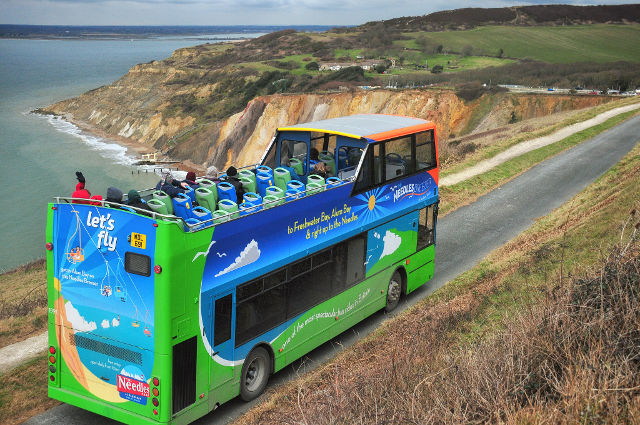 The Needles Breezer, an open top bus ride that travels between Alum Bay and the Needles Battery on the Isle of Wight is listed as number four in The Guardian’s Top 10 of the UK’s best open-top bus rides.

Operated by Southern Vectis, the ride travels along the

This ride heads across Tennyson Down for a vertigo-inducing climb up the road from colourful Alum Bay to the Needles Battery.

The Needles (three unmistakable chalk stacks with a lighthouse on the end) are directly below, and the closest views are via a National Trust tunnel through the downs.

The bus takes a circular route from maritime Yarmouth, stopping at classic landmarks including thatched St Agnes church and the Dimbola gallery, a museum in the house where Victorian photographer Julia Cameron lived and Alfred, Lord Tennyson was a regular guest.

See The Guardian Website for details of the other open top bus rides.

Thanks to OnTheWight reader, James Wilks, for the heads-up.

Well done. Sometimes we residents don’t fully appreciate what we have in our doorstep.