Last year the 70 wonderful volunteer watchkeepers kept lookout at Needles Coastwatch for 6,710 hours, maintaining the station for 365 days in all weathers. Well done to them all! 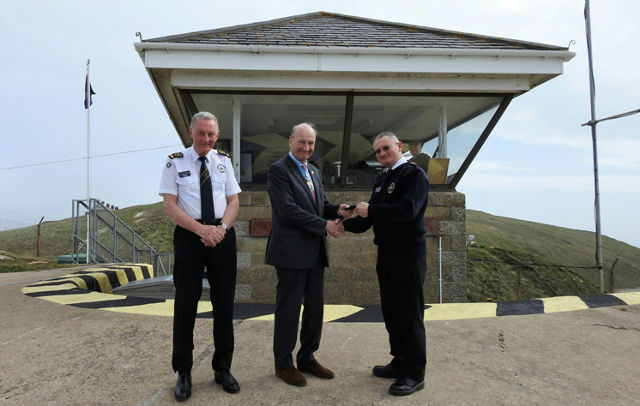 Paddy shares this latest news from the Needles Coastwatch. Ed

The High Sheriff visited the National Coastwatch Institution (NCI) lookout at West Highdown on Tuesday marking the NCI’s busiest year in maintaining a watch over this iconic stretch of water.

During the year the NCI was involved in over 25 incidents and logged over 8,500 vessel movements – excluding the 1,600 entrants in the Round The Island race.

The 70 volunteer watchkeepers kept lookout for 6,710 hours maintaining the station open for 365 days in all weathers.

We are local volunteers who keep watch from the Coastguard Station at this iconic site. Our role is to spot problems and be the local eyes and ears for helicopter, lifeboats and land-based coastguard assistance.

What We Do
We scan the water for kayaks, jet-skis, dinghies, yachts and fishing boats in difficulties. We report problems to the Coastguard who coordinate rescues. We also keep a friendly eye on the 300,000 walkers that visit each year.

Image: High Sheriff is pictured presenting Peter Dent with his Senior Watchkeepers epaulettes in recognition of his contribution to the success of NCI maintaining the safety of this stretch of water as well as the thousands of visitors.

1 Comment on "Nearly 7,000 hours of volunteer service at Needles Coastwatch in last year"

I just wonder what we would do without these people who volunteer 365 days a year from coastal watch to RNLI and in shore rescue . Well done to you all for your hard work