A collaboration between the Spithead Masons and the British Heart Foundation has led to a new Defibrillator being installed in Seaview. 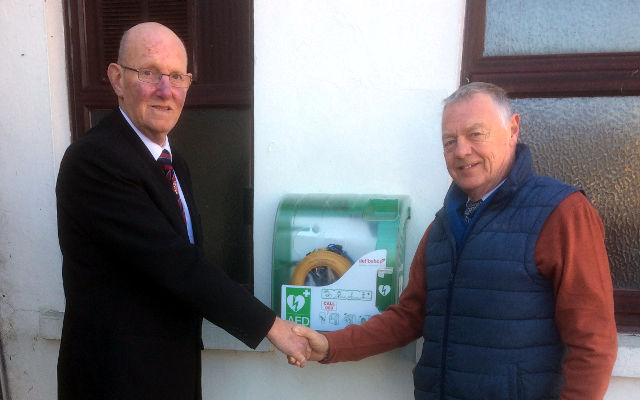 Seaview has a new Defibrillator.

Located on the East wall of the Masonic Hall, Fairy Road, it’s a collaboration between the Spithead Masons, who purchased the Defibrillator and paid for its fitting, and the British Heart Foundation, who donated the cabinet it’s held in.

In the photo above Bob Cooper, Secretary of the Spithead Masonic Lodge, introduces the now-publicly accessible defibrillator to Cllr Barry Elliott, vice chair of Nettlestone and Seaview Council.

“On behalf of the residents of Seaview I thank the Spithead Masons in their generosity in the purchase of the Defibrillator. We all hope it will never be needed, but if it is it us here ready”

“The Lodge purchased the Defibrillator just in case it was needed. The British Heart Foundation then generously donated the external cabinet. We have had this fitted and so it is now available at anytime. The ambulance control are fully aware of its location. As Cllr Elliott said let’s hope it is not needed.”