South Coast Leisure have submitted and application to Isle of Wight Council which claim to create up to 200 jobs in a new retail and leisure park in Newport. 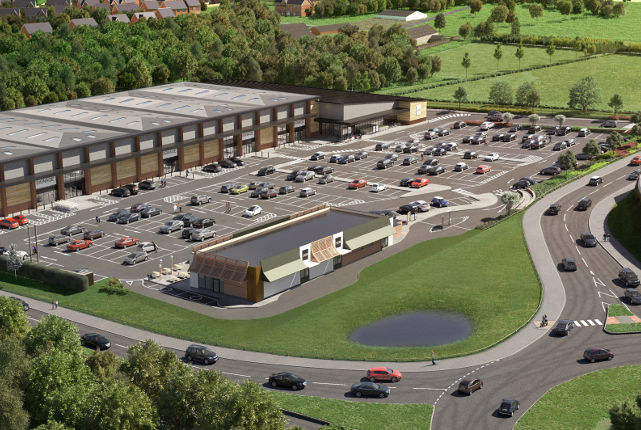 Plans to create up to 200 jobs in a new retail and leisure park in Newport have been submitted to Isle of Wight Council planners.

Proposals for the Newport Football Club site on St George’s Way would also kick-start work to relocate Newport FC to a new state-of-the-art sports facility off the nearby Racecourse, securing the club’s future.

Lodged by the current football ground owners South Coast Leisure, the plans for St George’s Way envisage a mixed development of the site with retail and leisure uses. The development comprises a total of five linked units with occupants including a discount food retailer, 24-hour gym, DIY/garden centre outlet, drive-through restaurant and two other retail units as well as parking for nearly 300 cars. Details of potential occupiers are currently being kept confidential for commercial reasons.

A retail impact assessment has been submitted with the application which has concluded that the development will not have a significant adverse effect on existing town centre retailers.

It is hoped, subject to planning approval that work to relocate the football club could begin early next year with Newport FC possibly settled at its new home as soon as possible. South Coast Leisure will work hard with the intention of ensuring the club is able to fulfil its fixtures while the new stadium is being constructed.

It is further hoped that construction of the new retail park could begin next year and be open for business in 2020.

“This will bring a different retail offering to Newport giving customers a greater choice and more reasons to travel to Newport.

“It will also help to maintain retail spend on the Island by increasing consumer choice.

“This is a site that has been ready for development for many years and we are delighted to be finally bringing forward a plan that will not only give customers a new retail offering but will also create a significant number of jobs for local people.

“It will also end years of uncertainty for Newport Football Club by providing them with a brand-new facility that will also provide a sporting and social amenity for the wider community.”

Free parking
Visitors to the development would be able to park free for long enough to encourage them to walk into the nearby town centre. Previous free parking offered at St George’s Park during prime retail periods has proved popular.

The plans have already been shared with the Isle of Wight Chamber of Commerce.

“Creating 200 new jobs will make a significant contribution both to the Island’s existing economy and its wider regeneration aims.

“With the Internet having such an impact on shops, this is an ideal opportunity to widen the choice of Newport’s appeal and encourage people to shop locally rather than online. This will be helped by the public being able to park at the new development and walk in to town.”

For goodness sake learn from history. When out of town retail parks open town centre’s close. If this development goes ahead there will be more boarded up shops in Newport, Ryde and Sandown

Excellent. Just what we need. Another retail park. Bye-bye Newport High Street.
More reasons to travel to Newport? What, with the current congestion? What about the loss of trade elsewhere?
Although there is recognition that people want free parking by the shops. Take note IWC.

Just looking at the photo – at all the presumably free parking…..
So, is there a strategy plan for the impact on Newport??????

Vote Up140Vote Down
realitycheck
DECLINED on the basis that our planners don’t have a clue – they have allowed massive housing developments with no access to doctors, dentists, schools or road access to be approved, placing pressure on already service and infrastructure-short local areas (Whippingham and Northwood) and then decline a development for a rural country store for no good reason whatsoever. Now this development will be approved without further infrastructure… Read more »
Vote Up40Vote Down
realitycheck

I think this development should be IMMEDIATELY DECLINED