The owner wants to go ahead with work, but planners say the floor levels of the cafe and car park must be raised by 750mm in order to meet flood evacuation requirements. 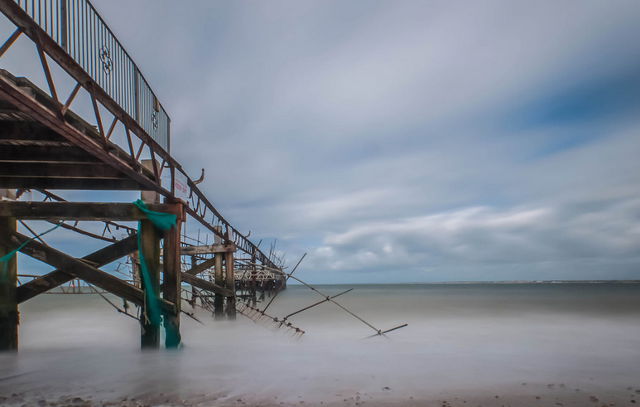 The restoration of 135 year old Totland Pier is being stalled due to ‘red tape’ says the owner’s representative, Clynt Wellington.

After a lull in the works due to financial issues, the owner is now keen to get moving again and have work continue over the summer months.

Requirement for floor levels to be raised
However, planning officers say without raising the level of the car park and cafe, they don’t believe the evacuation plan would “provide future occupiers with a safe means of access and egress during a storm or flood event”.

The council have requested the floor level through and around the car park and cafe – which sits on the land end of the pier – be raised by 750mm.

In an email, Clynt told OnTheWight,

“We currently have a situation where we wish to start work on the pier, but being prevented from doing so by red tape. Legislation opposed to common sense clearly prevails, so the planning officer who has taken a professional and pragmatic approach to the problem, hands are tied.”

Cafe refurbished already
The original plan was for the cafe to be demolished and raised 750mm, to ensure it was protected from a “200 year storm”.

The cafe, however, has recently undergone a refurbishment following the suspected arson attack in January 2013, making it unpractical to now raise the floor level.

“Unfortunately, due to circumstances outside of our control, the works were delayed. Therefore the cafe owner decided to refurbish the existing cafe as is and as the building is existing, there are no occupancy or evacuation restrictions to its use.

“To allow the occupation of the holiday unit without raising the floor levels in the café and the car park could adversely impact on the safety of occupiers of the approved holiday unit in terms of providing a safe access and egress during a storm and or flood event.”

Clynt goes on to say,

“We have suggested that we retain the 750mm rise in the pier and step down directly it reaches the cafe. Installing a disabled lift to offset the rise. We have agreed to strengthen the direct access point through the cafe with a steel frame and agreed an evacuation plan that would encompass the possible 80+ cafe guests (where currently there is no requirement) as well as the possible six residents in the house on the pier.”

“Common sense needs to prevail”
Whilst this solution would protect access along the pier and through the cafe, Clynt says there’s still a possibility the car park may be also be awash in a heavy storm, so deemed unacceptable by planning officials.

“We have agreed to a pier master, a further direct link to the coast guard and several other similar safety covenants, but of no use. This is despite weather forecasts being available between three and five days prior to any storms arrival. Furthermore, the option of protecting the cafe guests, with a detailed evacuation plan, must surely be an overriding consideration for a minor dispensation.

“We are ready to start work immediately, but common sense needs to prevail! If a storm is imminent, allow the pier master to consult with the coast guard and decide on closing the pier effectively protecting 86 people, opposed to the current situation, where nothing applies and the pier remains an eyesore.”

State of the road
The road directly at the end of the pier was in an horrendous state when we were last there in May. It would seem to make sense that if Island Roads have resurfacing work to do there, perhaps the level could be raised at that time?

Have the Planning Officers gone mad a Sea level rise of 750 mm or 29 inches in old money would mean Yarmouth and many other Seaside towns would be under water the few people who would be perambulating on Totland Pier would be so small in the scale of things they probably would not be noticed.Let the man get on with it .

Vote Up00Vote Down
ThomasC
Maybe we should do a little search before spouting nonsense Martin – the plans were agreed and Clynt must have been happy with it before he ‘ran into financial difficulties’. I doubt he’s a terribly poor chap, but he does seem to bump into the odd problem with his cashflow, much like his second go at Taymouth Castle, after his first pop at renovations there went titsup.… Read more »
Vote Up00Vote Down
martin william wareham

Have the Planning Officers gone mad a Sea level rise of 750 mm or 29 inches in old money would mean Yarmouth and many other Seaside towns would be under water the few people who would be perambulating on Totland Pier would be so small in the scale of things they probably would not be noticed.Let the man get on with it .

Rules is rules. This is the council after all, never known to use discretion or common sense when they have the regulations to rely upon.

When the same planning authority deals with any fracking applications, may we assume from this ruling that no further threat to our water, air, soil, health, or climate will be permitted here?

Planning permission has been approved for this development. The developers would have specified all the dimensions of their scheme. The Council Planners cannot now change the specification.

Vote Up00Vote Down
Sally Perry
Sorry if it wasn’t clear enough in the article (under the sub-head Cafe refurbished already), but the approved application included raising the cafe floor and surround by 750mm. As the cafe refurbishment (we’re told at a cost of around £70k to the cafe owner) went ahead whilst work on the pier was stalled due to financial issues, the owner of the pier is now asking that they… Read more »
Vote Up00Vote Down
Phil

The original plans had the floor level raised, and that was before the cafe was re-furbished. So why ignore the plans then ?? when that is what was submitted ??