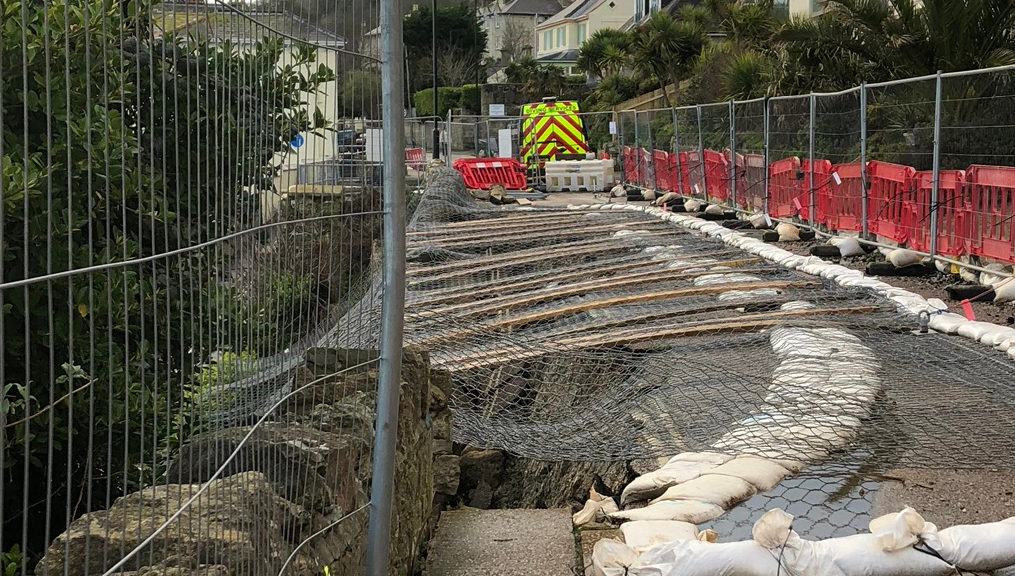 Further detailed ground investigations are to be undertaken shortly to confirm the cause of the collapse to the retaining wall at Belgrave Road in Ventnor.

The findings will help engineers design and implement a scheme to repair the wall and re-open the road. It is envisaged that repair work could begin in early summer 2021 and be completed by the end of October.

Twice weekly inspections
Visual site inspections continue to take place at both Belgrave Road and Esplanade Road twice weekly to monitor any wall movement and cracking at the top of the terrace and the middle and lower sections. Additional inspections are also held after periods of bad weather.

These inspections have shown no further significant movement, cracking or deterioration in recent weeks.

“Until now, more detailed investigations have been hampered by the Covid-19 restrictions and while there has been no significant movement, remedial works remain a priority.

“We are now in a position to step up the investigations and the forthcoming survey work will help us to plan a way forward with the Isle of Wight Council.”

House surveys
As a prelude to the investigation, a survey of six homes on Belgrave Road is to be undertaken so their condition during both investigation and construction works at what remains a sensitive site can be monitored.

An indicative timetable has been communicated to residents and local stakeholders as part of the commitment of Island Roads and the Isle of Wight Council to keep the local community informed of developments.

“It is important that the next steps are decided based on sound evidence and the forthcoming survey work should give us the information needed to design and implement the best possible solution.

“While, for reasons stated, it has not been possible to undertake these investigations before now, we hope residents and the Ventnor community are assured that we are now working to a schedule, albeit at this stage, an indicative one.

“It goes without saying that we will do all we can to complete the work in as short a timeframe as possible, though we must also ensure that at all times we maintain the safety of residents, local people and our workforce.

“We would like to thank residents for their ongoing co-operation and understanding and we will ensure both they and the wider local community are kept up to date with the latest developments.”

Background
It was at the end of January this year that part of the retaining wall at Belgrave Road failed.

Subsequently the site has been enclosed with wire netting to protect residents from any potential dislodged debris.

Sandbags are also in place to reduce the risk of surface water entering the failed area.

News shared by Claire on behalf of Island Roads. Ed

“we are now working to a schedule, albeit at this stage, an indicative one” being official parlance for “somewhen”…

Vote Up230Vote Down
Tamara
Living on this collapsed terrace for the past year must have been so stressful for the homeowners, not knowing if or when they would have to leave their homes. Surely surveys of the buildings in Belgrave Road to ensure the residents’ safety should have been carried out immediately. What have the buildings insurance companies got to say about it? It reminds me of the road collapse at… Read more »
Vote Up24-4Vote Down
Tamara
Those living on the terraces below are also endangered. They, too, want to know what has caused this collapse, how and when this terrace will be rebuilt, and how it will be reinforced to prevent it from happening again. These answers are long overdue. Almost a year has gone by and nothing has been done, except to secure netting over the toppling wall and sunken road and… Read more »
Vote Up14-7Vote Down
horace

It hasn’t been used as a shortcut for at least 15 years.
It’s one way.

Being one way, Horace, hasn’t prevented it from being used as a shortcut – one way – by most local traffic heading for Park Avenue.

Agreed. In lockdown entire buildings have sprung up on the mainland. Bet Mr Ward has run up a good expenses bill for site visits, nevertheless. The 19 miles each way from Sandown to Ventnor buys a pair of trousers on line in only 37 visits.

Great news BUT what about a date to repair the Undercliffe Road. What was one of the best and fabulous thoroughfares for visitors and residents alike. Talk about living in the backwoods. The people of Ventnor and surrounding villages are certainly treated like Hillbillies

Vote Up14-15Vote Down
Tamara
The Undercliff Drive, a prime example of a road unable to cope with the amount of heavy traffic that was using it, even after it was made one-way for coaches because it was too narrow in places. This road has five geological faults within one mile between St Lawrence and Niton Undercliff and a major waterlogging problem, causing landslips after a lot of heavy rain. There had… Read more »
Vote Up24-5Vote Down