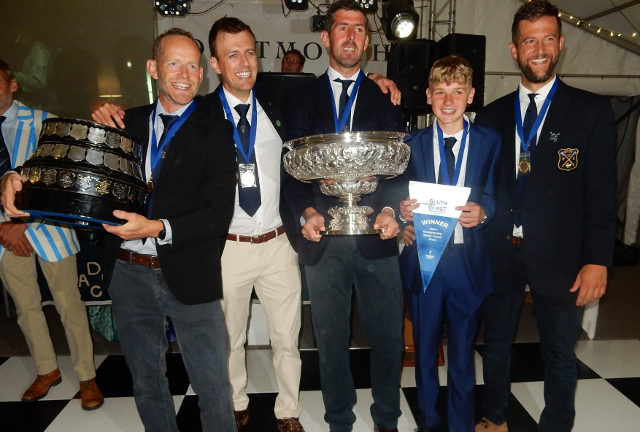 The boat lent to us by Quintin Boat Club had been polished to a glinting shine by Micky Jenner, all nuts and bolts checked. As the last of the ride ebbed out of the River Dart the crew boated and headed for the start.

Tangled oars
Ryde had a reasonable start after a poor first stroke. As the crews approached the first bend, the oars of Deal and Ryde became tangled, with violent clashing and many warnings being given.

Greenbank Falmouth then clashed with Deal with three crews being impeded on lanes one, two and three the crews on the other side of the course (lanes four, five and six) started to move away with the benefit of the first bend.

Exeter and Herne Bay were then able to move across the course negating the benefit of the inside of the second bend that lanes one, two and three were due, with BTC not quite making it. Herne Bay and Exeter then had around a two-length margin over the trailing field to cross the line.

As the crews returned to the boating area it then unfortunately became apparent that a member of the Herne Bay crew had become unwell and was in an ambulance and was receiving medical attention.

At this stage no one seemed sure of what was going to happen and when the re-row would commence.

Race to be re-rowed
Just as the Ryde crew were tucking into their lunch at approx. 16:15, the announcement came that the race would be re-rowed at 17:00. All crews slowly began to launch and by about 17:10 all crews were at the start.

Just before the race was due to start, more drama unfolded. BTC had protested about Herne Bay using an ineligible substitute (for their unwell three man) – the sub was a member of Bexhill Rowing club, and had raced for them that day. Herne Bay who seemed genuinely surprised and upset voiced there opinions to the start marshalls, then there was some unpleasant communication between BTC and Herne Bay whilst the other three crews sat waiting to start the race.

Eventually, around 17:45 after Herne Bay had left the course and in the absence of Greenbank Falmouth – who appeared to be prioritising other events – the race got underway.

Navigating around the chain ferry
Ryde got off to a reasonable start going off level with the crew from Deal beside them punching into the strong flooding tide, all crews navigated the first bend successfully with Exeter and BTC drawing away on there bend, as the course straightened towards the second bend Ryde began to charge, striking between 37 and 38 strokes per minute Ryde began making in-roads.

As the crew the approached the chain ferry (crossing the course) it became apparent to coxswain Owen Barnaby, that he was going to have to pull off an extremely skilful manoeuvre to get round the ferry that decided to cross the path of the race.

The coxswain pulled it off in style and at this point Ryde were two lengths down on Exeter. Now positioned nearest to the river bank Ryde started to lift the boat, increasing their rate of striking to around 39, the crew sensed the opportunity – one that they were not going to give up.

Great end to dramatic day
Ryde drew level with Exeter with 3-400m to go, before edging their noses in front to win the South Coast Championship by around a quarter of a length on what transpired to be a very dramatic day.

The crew had worked hard throughout the season and really ramped up the training in the weeks leading up to the event, clocking up around 200km in the final line up over a few long weekends.

Thanks to supporters
The men’s senior crew have received help from many different people and places throughout the season and would like to thank the following in particular: