Liz Earle was flying the flag for the Isle of Wight recently at the Chelsea in Bloom competion, where they won the Silver Award! 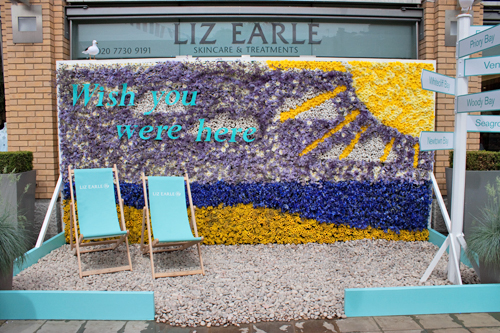 Congratulations to Isle of Wight beauty company, Liz Earle, for their recent win in the Chelsea in Bloom 2014 competition. The competition, which is in its ninth year, is a collaboration with the Royal Horticultural Society (RHS). The aim is to “transform the streets of Chelsea from the 19th to 24th of May with breathtaking floral displays”.

Liz Earle’s Duke of York Square branch certainly took inspiration from the Isle of Wight for the competition.

The Silver award-winning design was created by florist, Derek Isaac of SuperNature Flowers, and featured a beautiful postcard themed backdrop of chrysanthemums, sea lavender and pale blue delphinium, complete with beach, deckchairs and signpost – pointing to some of our favourite places on the Isle of Wight.

Liz Earle MBE was there to cut the ribbon at the launch of the competition. Our thanks to Rona Wheeldon for use of her photos.