Thank you to all the teams who carried out rescues or made the Isle of Wight safe for residents yesterday. You are very much appreciated 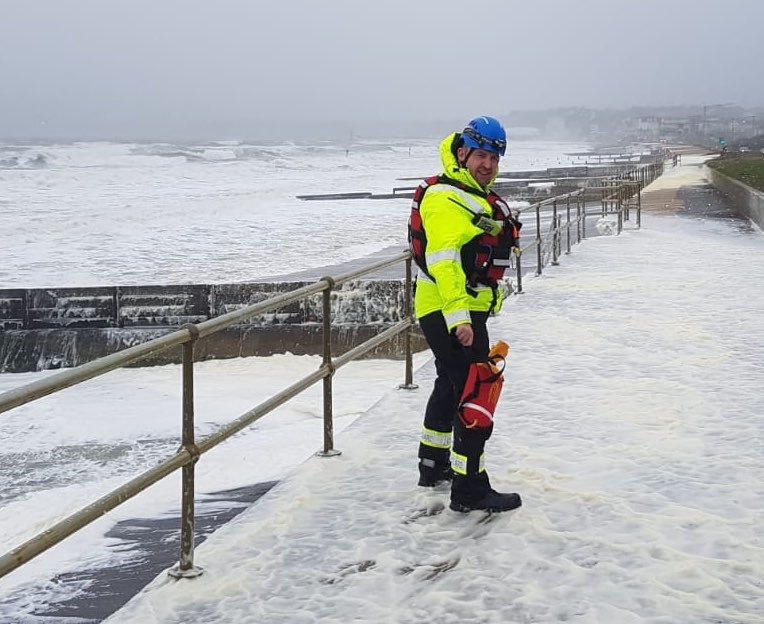 It’s not over yet (see latest flood warning), but the emergency services, including the likes of our coastguard and lifeboats, as well as Island Roads and the crews clearing debris of fallen trees from the highway, are all to be congratulated following yesterday’s battering of the Isle of Wight by Storm Ciara.

On Sunday afternoon, The Needles National Coastwatch recorded a whopping wind speed of 97mph. Not quite the fastest recorded (we believe that was around 109mph) but still pretty mammoth.

Trees down
Several large trees came down and blocked roads during the storm, so a big well done to the Island Roads’ teams who managed the traffic and to the contractors who cleared the debris, during challenging conditions.

John Cattle shared a video on social media of a large tree being cleared that had narrowly missed him and his kids half an hour earlier.

Among others, trees came down and blocked the highway in Bullen Road and Ashey Road in Ryde, as well as Calbourne Road.

They reported that the casualties had gone to assist a kite surfer who was in difficulty.

Whilst there, the team gave safety advice to members of the public who were playing with their children in the surf.

Taking risks
Over in Freshwater, Annabel Cattle shared this shot (taken from a safe point) of two people out on the rocks in the bay. She told OnTheWight that they luckily made it back to the beach just in time, before a huge wave swamped the rocks.

And to complete the hat trick of photos from the Cattle family, Richard Cattle shared this great shot of the sea hitting Totland seawall (taken from a safe position). Can you spot the sea monster?

Thank you to all the teams who rescued or made safe the Isle of Wight for residents yesterday. You are very much appreciated.

Cross-Solent travel
For those travelling to the mainland, the skippers of Wightlink’s FastCat and vehicle ferry are to be congratulated for keeping the service going longer than any of the other cross-Solent transport providers.

As you might expect the strong winds made crossing the Solent impossible for many services for much of the day.

Praise for Wightlink and Island Roads in the same article – must be a first!

Credit where credit is due. Not the first time either of them have been congratulated, but yes, perhaps first in the same article.

Because they are not an emergency service. I could have just included them in the ‘all’, but I specifically wanted to draw attention to them too. I know they work tirelessly in all weathers, hence the reason for highlighting them in the article. If I didn’t think so, they wouldn’t have been included!

Oh for goodness sake! If I didn’t want to mention Island Roads I wouldn’t have. It’s as simple as that. I wouldn’t have placed a reference about them near the top of the article, or gone to the trouble of finding a photo to show just what they have to deal with.