Mild weather led to large numbers of swimmers at this year’s Ventnor Boxing Day Swim 2018. A wide variety of people taking part as you can see in the video 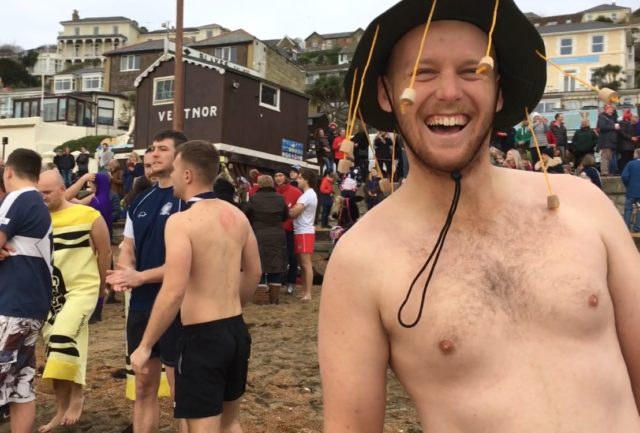 There was a great turnout for the annual Ventnor Boxing Day Swim today.

Throngs of spectators lined the town’s Esplanade to watch the brave take the plunge at midday.

The number of people taking part this year appeared higher than previous years, perhaps encouraged by the milder weather.

Mild air, chilly sea
However mild the air is, there’s always the shock of the cold awaiting those who enter the water.

As the countdown rang out down the beach, there were still some latecomers changing out of their civvies into swimsuits/fancy dress outfits – no matter, there’s plenty of sea for all of them – at least they were making the effort.

Enthusiasm
As is often the case, the initial enthusiasm of those who run toward the waves – and those waves were subdued this year – there’s often a higher enthusiasm of the same making their way out of the water to the comfort of a towel and warm clothing on the beach.

There’s a contingent hardcore who spend an extended period bobbing around in the water, their bodies gradually turning bright red.

Ventnor Coastguard: Protecting
Chatting to the Ventnor Coastguard – who were, as ever, on hand to assist anyone who might be getting in trouble on the shore side (whilst Sandown and Shanklin Independent Lifeboat were out on the water) – I learnt that the bright red skin indicated the blood was draining from the skin, retreating to the internal heat of the body.

After retreating, many people pose with their friends to snap photos to capture their day where the body’s natural inclination to keep itself warm was overridden by the desire to dash headlong into the sea.

One thing is for sure, the time they ran into the sea in Ventnor on Boxing Day will not be forgotten.

Please donate to P.A.T.C.H.
Don’t forget, that each year the swim raises money for P.A.T.C.H. – a local charity that provides financial support for Ventnorians receiving cancer treatments on the mainland.

You can donate via the Just Giving Page.