This fundraising event for Ventnor charity, PATCH, takes three months from start to finish to organise. OnTheWight speaks to the charity founders. 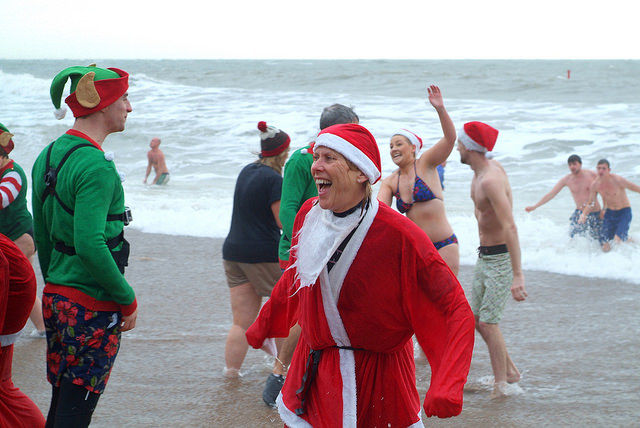 Earlier this month it was incorrectly reported by the IWCP that the Ventnor Boxing Day Swim had been cancelled. What had in fact happened, was that those who have for the last 12 years organised the health & safety and fundraising elements of the swim (local cancer charity, PATCH), were hanging up their swimming caps this year.

As reported by OnTheWight, other members of the Ventnor community stepped forward almost immediately to ensure the traditional Boxing Day Swim carried on without any problems. It’s due to take place on Tuesday at the usual time of midday and all monies collected will go to PATCH.

Behind the scenes
Very much aware of how much goes into organising the swim each year – according to organisers the process takes three months from start to finish – OnTheWight thought it would be interesting to hear some of the background from Erika Arnold, one of the three PATCH founders who have given up their Christmases to make the swim a success for the last 12 years.

Off the blocks in November
The work starts in November, when the PATCH members, Erika, her husband Den, and their friend Ros, start getting in touch with the press, producing flyers and distributing sponsorship forms.

Despite all the press coverage and flyers pointing out where the forms can be picked up and where the buckets for donations can be collected, they receive endless phone calls or emails from people requesting the same information over the following two months.

Street permits
The street collecting permit has to be applied for. This ensures PATCH can legally collect donations in buckets along the seafront during the swim, but it does come with it some inconvenient conditions.

The amount raised via the donation buckets must be reported in the next edition of the paper, so usually means that Erika and Co have to head back to her kitchen immediately after the swim and spend several hours counting the donations – many in coppers.

“My kitchen table is six foot long and the change goes from one end to the other.”

Luckily, the majority of the donations are in notes and PATCH are immensely grateful to the members of the public who support the charity.

“Every year we have had trouble with people trying to come in on the back of our hard work and raise money for their own aims. That’s one of our main battles and last year was no exception at all.”

Erika goes on to say that for many of the swimmers, it goes above their heads what the swim is in aid of.

“Someone said that we’re cashing in. Yes, we are! That is the whole point of it.”

Last year when handing out flyers before the swim, one gentleman refused to take a flyer and when Erika asked, “Don’t you want to know what this is in aid of?”, he rudely replied, “No!”.

The crowds sky-rocketed
When PATCH first got involved in organising the swim back in 2005, there were just 31 swimmers – fast forward to 2016 and over 400 people entered the sea on Boxing Day, with thousands spectating.

It was a great surprise to PATCH however, that although there were a large number of swimmers, they only had 11 sponsorship forms returned.

“Over the moon” with new organiser
Erika told OnTheWight that she and the others at PATCH are over the moon that fellow Ventnorian, Maria Sexton, has taken on organsing the swim.

“We felt sure someone else would, after all we took it over from others running it in the past and Hugo (who first started it in 1980) wouldn’t want to give it up, it’s his baby really.

“Maybe another year we’ll go down and give our support and pick up a bucket.”

Thousands of people turn up to see the event take place, but despite this Erika said they have very little support from the businesses.

“We are appalled, that’s what’s done it really. We don’t go round asking for money, that’s not our style, but they know we’re there and we look after the people that help us.

“Just a thank you would have done, ‘thanks for your efforts PATCH’, but we weren’t even offered a cup of tea or coffee.”

Supporting those who help
Each year, the Sandown and Shanklin Independent Lifeboat sit in the bay keeping watch for any problems. PATCH ensure they receive 10% of all takings on the day to go towards their fuel costs.

Ventnor Coastguard, who are also in attendance on the day, are not given any money – as they are not a charity – but PATCH make sure they have a tea and biscuit fund for the year.

Over the time of the charity running, they have given out over £55,000 to residents struggling with travel costs to have treatment in Southampton or Portsmouth.

Erika shared stories of people who had lost their jobs due to time off for treatment, and others who had taken equity out on their homes just to be able to afford the six weeks of travel costs.

Find out more
You can find out more about PATCH by visiting their Website. They are a wonderful charity doing some very special work in the Ventnor community and deserve to be supported.

Image: chi_bellami under CC BY 2.0