Actor and Scout Ambassador, Warwick Davis, took time out to spend the day with Isle of Wight scouts at Hovertravel. 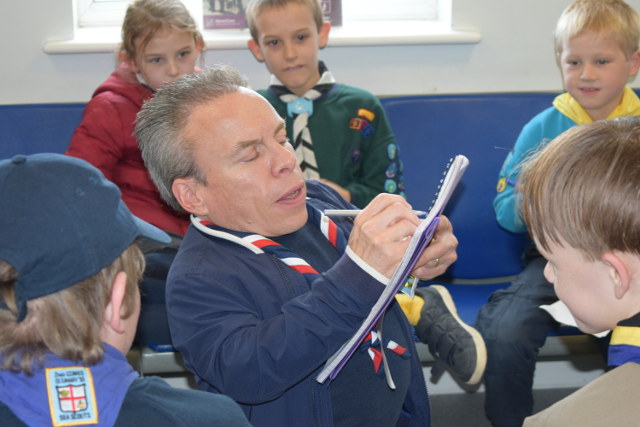 Warwick Davis flew in from filming in the United States with Angelina Jolie to meet scouts on the Isle of Wight, in his role as Scout Ambassador.

The Harry Potter actor and presenter of Tenable is currently filming the Maleficent sequel, Mistress of Evil, but took time in his busy schedule to meet with 66 scouts chosen from each of the 23 scout troupes on the Isle of Wight.

By invitation of Lady Grylls
Warwick was invited to the Isle of Wight by Lady Grylls, the mother of adventurer Bear, and came to the Hovertravel terminal to meet with the scouts, and to go on board a hovercraft to learn how they work – part of the scouting Air Activities – Flight Badge.

On a Mission
It was during filming Warwick’s ‘Bear Mission’ for ITV last year that the subject of scouting first arose, and Warwick spoke of how much he had enjoyed being a scout himself.

Hard to say no
Warwick, who said that it was an honour to be a part of the scouting movement and to be able to contribute to the scouting ethos, joked,

“It’s hard to say no when he’s dangling you a hundred feet in the air.”

Warwick admitted that saying yes to Bear’s offer to take him on one of his missions for ITV was almost immediate.

“Usually I think about something for a while, maybe an hour or so or a day, but I said yes in literally a minute.

“I think the zip wire was the scariest, although abseiling was also terrifying!”

A ticket to Ryde
In Ryde, Warwick spoke to Ian Griffiths, the new Chair of Visit Isle of Wight, at a photocall at the Ryde Castle hotel before meeting with the scouts.

He said it was good to be back on the Island for the first time since filming an episode of his series ‘Weekend Escapes with Warwick Davis’ with his family in their camper van back in 2015.

“We spent a lovely few days here and did some paddle-boarding and fossil hunting and spoke to a palaeontologist who was showing us that you can walk along the beach and find fossils.

“We visited a model village and I felt right at home there.”

“People on the Island are more relaxed”
He added,

“I love getting the ferry over, it’s the start of the holiday and you feel like you’re going abroad. My son Harrison couldn’t work out that we weren’t abroad. People on the Island are more relaxed. And you have palm trees here too, which makes it feel exotic.”

Scouting royalty
At Hovertravel, Warwick was introduced to Imogen Baden Powell, great niece of Robert Baden Powell who founded the Scouting movement over 100 years ago.

He then had an introductory chat with the scouts in the Hovercraft terminal in Ryde and many autographs and selfies, then Warwick posed for photographs in front of a hovercraft with the scouts and guests and presented Dylan Reeves with the Chief Scouts Gold Award, the top award for the Scout age group (10-14) and represents the culmination of four years of hard work completing his challenge awards and developing skills for life.

“It was a huge surprise to meet Warwick, he was such a nice guy. He congratulated me on completing my Gold Award and we spoke about what it was like to be a Scout on the island, we also talked briefly about the experiences I’ve been lucky enough to have like attending the Swedish National Scout Jamboree in 2017. It was a fantastic afternoon. #”

Warwick and the scouts then had a talk from pilot Jock, toured the hovercraft on the landing apron and were able to look inside the engines, and take a turn in the cockpit.

Strong wind halted planned crossing
Sadly a planned demo flight around the Solent had to be cancelled because of wind conditions. Hovertravel instead gave each scout a free return ticket to use at a later date.

“This special Scouts charter marks the start of our relationship with the Scouts Association. Today (Saturday) we are launching our discounted travel for all Scouts, Beavers and Cub groups and offering their volunteers a discount too.  We are also proud to be able to say that this charter helps the Scouts gain their Air Activities – Flight Badge.”