Wightlink strike is on: Dates of action announced (updated)

The RMT say that Wightlink staff have “bent over backwards to help the company survive during this pandemic only to be treated as cannon fodder”. Strike dates within 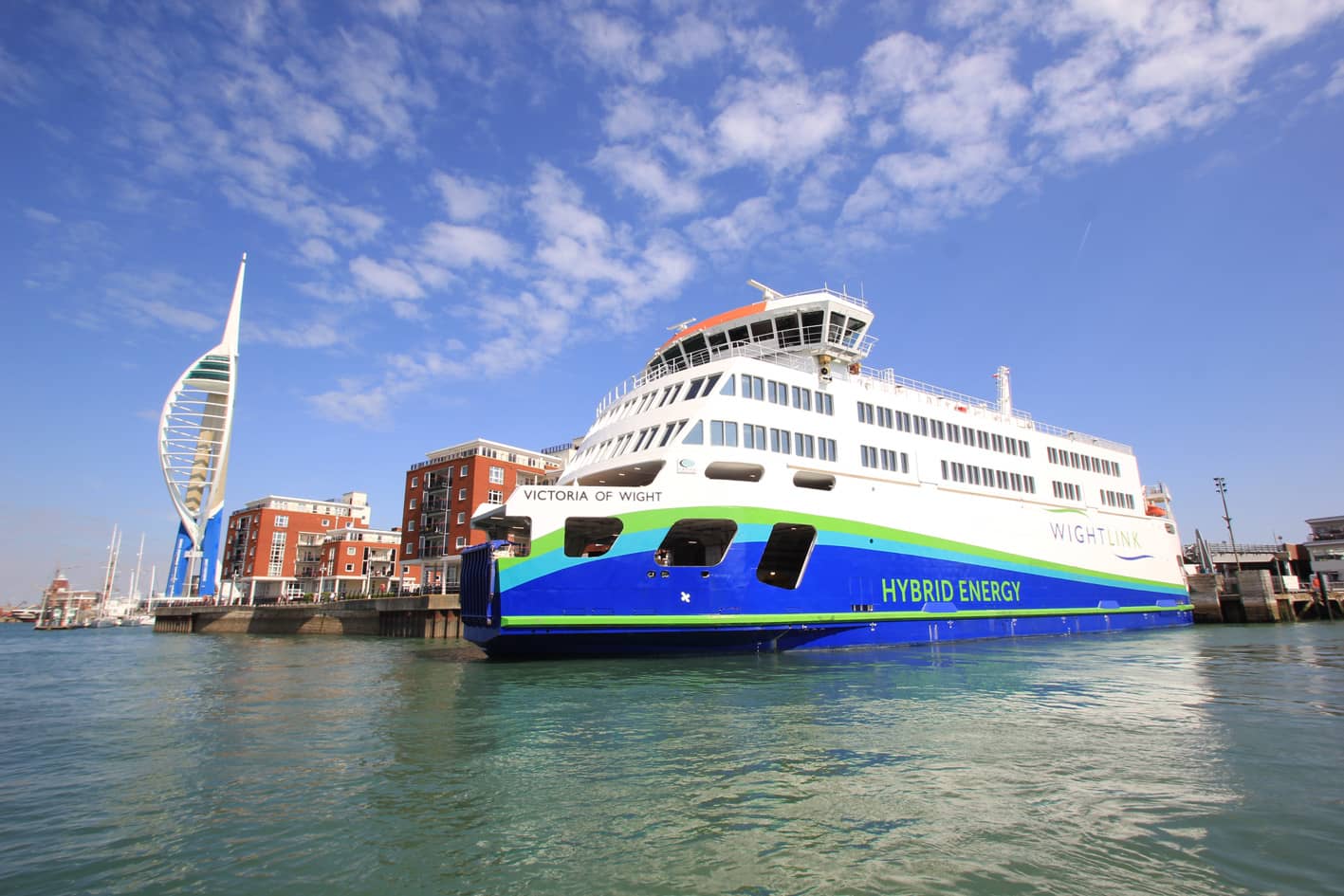 The RMT union has announced a series of strike dates for Wightlink staff as part of industrial action against proposed changes to their pension and flexible working practices.

As reported by News OnTheWight on Thursday, a ballot was held earlier this month in which members voted overwhelmingly in favour of strike action after, the RMT say, it became clear that Wightlink had offered “no commitment to withdraw either proposal”.

Wightlink plan to close the Defined Benefit Pension Scheme to existing members and withdraw their proposal to reintroduce the flexible working practices, which all employees were subject to in the first six months of the pandemic.

“This union will not tolerate the contempt towards our members, the processes and legislation set up for good industrial relations. As a result of the company’s failure to recognise the ballot mandate and their failure to enter into meaningful discussions to resolve this dispute, the union’s National Executive Committee has instructed that the following strike action takes place.”

Strike dates
All Wightlink Ltd and all Wightlink (Guernsey) Ltd members are instructed NOT to book on for any shifts that commence between:-

In addition, they are exploring all legal avenues in order to try and resolve this matter and have written to the company demanding that the CEO and Board Members are present at their next round of negotiations on 12th January 2021.

“Wightlink is consulting with its employees on how to protect jobs and ensure it survives the serious financial crisis caused by the Covid-19 pandemic.

“Very few people are now travelling and passenger numbers are unlikely to return to normal in the near future. Other companies in the transport sector have already announced redundancies and pay cuts as a response to the severe financial situation in 2020, which is continuing.

“Our proposal covers changes to pensions, including a doubling of company pension contributions for the majority of colleagues, and flexible working to help Wightlink become a more sustainable business. This proposal avoids compulsory redundancies or pay cuts.

“We are disappointed the RMT has announced strike dates later in the year while formal consultations are still underway. We are confident we will be able to reach agreement with the union on these issues in the coming weeks.”

20 Comments on "Wightlink strike is on: Dates of action announced (updated)"

newest oldest most voted
Colin
I wasn’t particularly impressed with the Wightlink management when I first read the proposals on this site a few weeks ago. It would appear they are using the pandemic to implement some negative changes to the staff working conditions. I can fully understand why the staff are proposing taking industrial action. The manner in which the company is bought and sold on a regular basis has been… Read more »
Vote Up48-7Vote Down
dubbegood
An example which reinforces what the leader of the council and Bob Seely have raised as concerns to address moving forward. Strikes to a lifeline service shouldn’t be happening and couldn’t with better regulation/protection or a fixed link. It highlights the general approach of the ferry companies. Prioritising gain, profit and share holders over staff who work hard for a community and put themselves at risk everytime… Read more »
Vote Up53-16Vote Down
hermit

Blame Stewart, Seely and Myles not the union, and of course the selfish ignorant people who came here and should have stayed away.

Flexible and sustainable.2 of the buzz words over the last few years.but what do they really mean? Thhink about it!

Vote Up60Vote Down
peterj
I note the recent edit which includes a new statement from Wightlink. It appears that the threat of strike has had the desired effect and that they will now negotiate, which was only what the RMT wanted. “We are confident we will be able to reach agreement with the union on these issues in the coming weeks.” I do note Wightlink’s use of ‘formal consultations’ being underway… Read more »
Vote Up8-2Vote Down
neilpalmer400
The RMT have a long history of exhibiting greedy behaviour with no concern for the public and little desire for reasonable negotiation. We’ve seen this for many years on the railways and it’s no surprise to see their “we’re special and deserve more than everyone else” attitude surface again here. At a time when thousands upon thousands have lost their jobs (or lives) and travel has been… Read more »
Vote Up6-17Vote Down
Better Red than Bled
@neilpalmer400. Where are the workers being greedy? They are asking for a decent pension which the Company are seeking to close for existing staff and debt to ask further staff. This will no doubt increase profitability for the company in future years but had very little to do with the firm surviving the pandemic. Staff have already lent the company 20% of their wages to keep the… Read more »
Vote Up14-2Vote Down
Better Red than Bled

debt to all further* = deny to all future

Vote Up90Vote Down
neilpalmer400
Defined Benefit Pension Schemes have become unaffordable in modern times. Look at the Billions in pension liability inherited form British Rail days (the RPS liability is in the range of £35bn). As we’ve seen from the RMT before they are run by a bunch of Luddites who want 21st century pay and benefits for 19th century working practices and productivity (look at the years of strikes and… Read more »
Vote Up4-12Vote Down
Spartacus

If it wasn’t for trade unions the world of work would be far worse. In terms of fighting injustice and inequality the unions are the mechanism for action. In any case how would you like to sit in a tube and travelling down dark dismal train tracks ever day or have worked down the mines. Unions are needed more than ever.

Typical what to expect from the Marxist led RMT still riddled with the hard left of Corbyn. One of the officers wanted all of Boris’s front bench to die of the virus. Disgusting. Striking during this pandemic is appalling. The Govt needs to seize their assets and defeat and destroy the marxist RMT once and for all

Vote Up14-55Vote Down
peterj
Nice rant, but protecting their workers’ existing rights and contracts is clearly not appalling. I believe you have this backwards and what is abhorrent is those companies that are using this pandemic as an excuse to cut staff and their pay. This article doesn’t make this clear, but flexible working conditions is often a euphemism for zero hour contracts. Now that is a disgusting practice, which I… Read more »
Vote Up54-10Vote Down
neilpalmer400

Employees need to be flexible as far as covering different shifts go as other employees get locked down due to contacting, or being exposed to, Covid-19.
Quoting from the article.
“This proposal avoids compulsory redundancies or pay cuts.”
As I said, there are thousands of people who only wish that applied to them. Striking during the pandemic IS appalling, but not unexpected from the RMT.

Vote Up6-11Vote Down
peterj
Firstly they could be keeping the hourly rate the same so then can claim ‘no pay cuts’, yet at the same time be reducing contracted hours (and therefore associated holiday entitlements) which would reduce workers income. They could be cutting other entitlements or benefits, we can’t tell. Secondly whilst you were quoting the article, in the interests of fairness I’m surprised you didn’t quote this: “The RMT… Read more »
Vote Up10-3Vote Down
neilpalmer400
Just look at the strikes the RMT have called already during the pandemic on the railways. And as for quoting “The RMT say they remain available for talks with Wightlink and is ready to enter into negotiations in order resolve the current dispute.” That’s standard boilerplate language the RMT always tacks on the end of any pres release when they’ve called a strike. It’s meaningless. FYI another… Read more »
Vote Up2-7Vote Down
Spartacus

You have not got a clue mate about the real world, you need to read Marxist theory and wake up to the corrupt Capitalist system that has broken Britain with poverty, homelessness, inequality and food banks all on the increase Tories are responsible for this.

Typical business and selfish position taken from those who exploit workers for their labour and get rid of them when the market dictates. Bring on the revolution to transcend Capitalism for Socialism to create a fairer more equal society.

The Capitalist system is set up to divide, impoverish and destroy us it’s time to take a long hard look at over 10 years of imposed Tory austerity which hasn’t worked even Boris Jonson takes that view, we need to restructure and change and that my friends is Socialism which is very much alive and kicking.