Diligence from the RNLI potentially save a boat owner.

Thanks to George Chastney for sending this one in – Ed.

Praise for the way the crew of Cowes RNLI lifeboat acted over a small cabin cruiser spotted stranded on a mud bank in the Solent yesterday (Thursday) evening was voiced by the lifeboat’s operations manager. 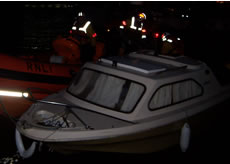 “The way they used their initiative while out on a training exercise was exemplary,” said Mark Southwell. “They had every reason to believe that who-ever had been on the cruiser had gone ashore until the cruiser, on The Shrape, refloated on the next tide. What appeared to be the cruiser’s dinghy was spotted on the beach at East Cowes, some 200 metres away, and there was no response from the cruiser to the shouts of auxiliary coastguards.

Boat boarded
“Despite all this, lifeboat helmsman Richard O’Callaghan decided that as a precaution crew member Martin Thomas should still go aboard and check out the cabin. And to everyone’s surprise he discovered a man below, seemingly confused and shivering under a blanket.”

The man, aged 32 and from Newport, had apparently been on a lone fishing trip when the grounding occurred. The impact had also partially dislodged the cruiser’s outboard and, apparently, led to the dinghy breaking free of its tow line.

Hospital checkup
The cruiser, a 15 foot Shetland based on a mooring at The Folly in the River Medina, was taken in tow; the man was landed at Town Quay, Cowes, where an ambulance was waiting to rush him for a check-up at St Mary’s Hospital, Newport.

The cruiser itself was taken on to Shepards Wharf Marina, which is also the base of the lifeboat. Although coastguards were subsequently asked to recover the dinghy, it had mysteriously disappeared by the time they arrived on the East Cowes shore. The lifeboat crew recalled that two men had been spotted in the vicinity shortly before.