Quay Arts are very proud to host an evening with Sebastian Peake talking about the fascinating life and prolific work of his father, Mervyn Peake (1911-1968), who has been described as ‘the incarnation of Renaissance man’ but is probably best known as author of the …

Quay Arts are very proud to host an evening with Sebastian Peake talking about the fascinating life and prolific work of his father, Mervyn Peake (1911-1968), who has been described as ‘the incarnation of Renaissance man’ but is probably best known as author of the Gormenghast trilogy. 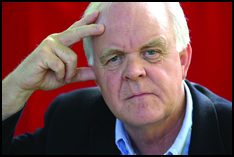 The death of his mother in 1983 accelerated Sebastian into promoting his father’s whole body of work, when he began hosting regular talks with question and answer sessions.

The first address in 1983 was at the English faculty at the University of Krakow and since then he has been speaking at literary festivals, bookshops, private gatherings, schools and universities both at home and abroad.

Jazz remains a lifelong love of Sebastian’s, but a penchant for the great wines of Bordeaux runs neck and neck and he has worked as a wine merchant for the last 25 years.

Sebastian also administers the Mervyn Peake Awards, which are given annually to writers and artists with Parkinson’s Disease.

This evening is a must for any Gormenghast trilogy fan – don’t miss the chance to hear more in the Anthony Minghella Theatre on Friday 19 September at 8pm.

More about Mervyn Peake 1911 – 1968
Sixty years on, the world of Titus Groan and his castle remains as contemporary now as when first published in 1946.

It is generally accepted that the Gormenghast trilogy as a whole offers one of the most original and sustained flights of imaginative writing of the 20th century and Mervyn Peake is best remembered for this timeless and highly influential work. Now translated into over thirty languages, to be joined shortly by Mandarin.

Less well known however, is his prolific output as a painter and writer of children’s books, nonsense verse, and work as a war artist, poet, and illustrator. Such classic texts as Treasure Island, Alice’s Adventures in Wonderland, The Ancient Mariner, Swiss Family Robinson, The Hunting of the Snark, Bleak House and others were illustrated, resulting in idiosyncratic interpretations immediately recognisable as his own. Texts were read closely before any drawings were committed to paper, though the description of the characters in the books, the location and atmosphere being brought to life, acted as the sole guide for his eagle eye, with the published drawings often remaining imprinted for ever on the reader’s visual mind.