To War with a Paint Box, Alan Morgan

Alan Morgan brings his paintings to Quay Arts next month.

Quay Arts in Newport welcomes painter Alan Morgan as he exhibits in the Rope Store Gallery next month. 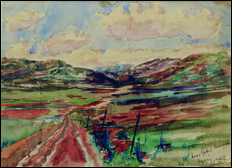 Island artist; Alan Morgan was an officer in 104 (Essex Yeomanry) Regiment Royal Horse Artillery serving in the Western Desert, Syria and Italy from 1942 to 1946.

As a soldier’s life consisted of periods of high drama interspersed with spans of rest and recuperation, his drawing and painting materials, carried in an ammunition box, were important to him.

He drew and painted many portraits of fellow soldiers of which a few still exist.

Some were drawn on air mail letter paper and sent home by the subjects.

He still attends a weekly life class – started many years ago in Bembridge by the late Pam Freeman and now continued under the direction of Colin Riches.

Son of an Islander, Alan and his family have lived on the Island since 1972, he currently lives in Bembridge with his wife Bobbie; and they have been married for 64 years.

This intimate exhibition runs during Armistice Day on Nov 11th; commemorating the lives of those who fought in WWI.