A new president took the chair at the Ventnor rotary Club on Monday 30th June.

Many thanks to George Harlow for sending through this announcement. Ed

Retiring president Adrian Day handed over the presidency to John Hilsum to lead the club for the 2008/2009 year. 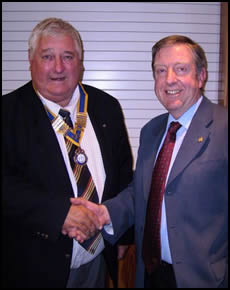 Adrian’s year saw the club grow in numbers it is well placed to fulfil its plans to aid the community, both locally and abroad, in the coming year.

New president John Hilsum said he had three aims for his year of office.

He wants to fulfil the club’s commitments to all those causes it supports as outlined in the club’s leadership plan, strengthen links with other service clubs such as the Lions and maintain the drive for new members.

John, aged 64, is married to Margaret and lives in Wroxall.

Amongst his other interests he is a Governor of St Catherine’s School in Ventnor and a passionate follower of cricket and is the Chairman of the Ventnor Cricket Club.