We caught up with Steve Stotesbury after he made the announcement of how the works inside the plant had been sacked tonight. 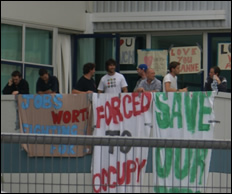 We were back outside the Vestas plant again tonight when Vestas worker, Steve Stotesbury, made the sombre announcement (video to follow) that the workers protesting inside the plant had been informed by Vestas management that they had been sacked.

Steve was pretty choked when making his address, but as you’ll hear from the interview, he remains defiant to help save the jobs of 600 employees of Vestas Blades.

He told us about plans discussed tonight to support those who have lost their redundancy money and what people can do to show their support.

As those following the Sit-In will know, Wednesday morning sees the injunction requested by Vestas be heard at the Court in Quay Street, Newport.

Steve told us that meeting (to which the public are urged to attend) had been planned for 9am outside Vestas on Wednesday morning and that following that there will be a march down to the Court for the 10.15am hearing.

The workers and supporters hoped for good numbers tomorrow morning as well as at the 6pm rally outside Vestas on Wednesday evening where there will be several guest speakers.