South Coast Leisure are seeking a five-year option to buy council land (next to where the new ASDA is planned) for £100,000 less than the valuation and want to rush it through before the beginning of February. 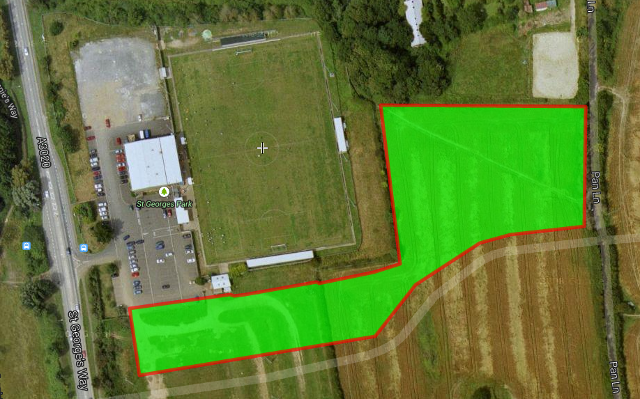 In 2014, the Isle of Wight Council granted permission for two separate planning applications to build supermarkets on land just outside Newport.

Although South Coast Leisure has planning approval for the development of a food retail store on its site (which is largely, the football ground and car park) it says it would need the council’s surplus land in order to carry out any future development, so are seeking an option to buy the council’s surplus land within the next five years, but at £100,000 less than the valuation.

It looks as though SCL plan to still develop something on the site, although not a food retail store.

Executive to discuss at emergency meeting
An extraordinary meeting of the Executive has been called for 20th January to discuss the recommendation.

South Coast Leisure cannot therefore implement its existing planning approval, as a consequence it is reviewing its plans for its existing site and has concluded there would be greater development potential if it were to incorporate the council’s adjacent employment land at Pan into its future plans.

In order to give South Coast Leisure time to develop these plans it has asked the council to give it an option to purchase the land for a period of five years and in return is prepared to agree a price of £350,000 for the acquisition of the land should it choose to proceed with its purchase at any time during this ‘option’ period.

The council say the the difference is offset by the economic benefits that may be achieved from a combined development of the sites and the savings the council will secure from not having to market or develop the surplus land itself.

Call-in disapplied
The report goes on to say,

The vice-chairman of the Scrutiny Committee has been consulted on this report and the reasons for the urgency of the decision. He has met with officers and raised a number of questions which were all answered to his satisfaction.

He has therefore agreed the decision is necessary and that the provision for Scrutiny ‘call in’ be disapplied; given the short timescales involved and the potential economic benefits should a scheme be developed.

13 Comments on "Council considering selling Newport land for £100,000 less than valuation and asked to rush sale"

If SCL want this land let them pay the full price for it.This is just time wasting by SCL

Who is the vice-chairman of the Scrutiny Committee these days?

Dave Stewart is still vice-chair. A new chair has not been voted on yet. Presumably that will happen at the next full council meeting?

They’ll buy it, leave it undeveloped and flog it in a few years for triple what they paid for it.

Vote Up00Vote Down
Billy Builder
So SCL want to acquire the land for some future non-specified non-food retail venture. This sounds to me like a potential out-of-town retail park, that will kill off the surrounding town centres. Just what the IOW needs – town centres with no retail – waste lands like so many town centres on the mainland The Council needs to be very careful, and should resist short term gain… Read more »
Vote Up00Vote Down
Island Monkey

The council is not a distress seller, it shouldn’t act like one.

Shades of the “Delegated Decision”, “Preferred Bidder” and “Call-in Disapplied” ploys exercised by the Tory IWC on behalf of their friends peeking out from Dave Stewart’s decision?

Vote Up00Vote Down
cers121
Forgive me this is not the case but I thought the IWCouncil are having to cut Care for those who need it, to Save Money… How can selling a bit of land £100,000 cheaper than its worth be saving money… Its so obvious this is simply sour grapes by SCL as the ASDA store, quite rightly, didn’t want to play silly games with SCL so they are… Read more »
Vote Up00Vote Down
tiki

They quite frequently dispose of assets for under the market value. A residence in Pyle Street springs to mind.

Vote Up00Vote Down
davimel
Oh God.. here we go AGAIN!!! Lets drop any oversight or protection for US residents and flog something off for £100,000 less than our own valuation in the blind hope that it may miraculously generate said £100,000 by being left untouched for five years before the new owner flogs it for at least £100,000 MORE than they paid and then the council will wring their hands in… Read more »
Vote Up00Vote Down
retired Hack
I have just come across the following paragraph on the agenda for the 13/1 meeting of the IWC Executive. There is no suggestion that it is in any way linked to the urgency being displayed (disapplying of call-in etc) in the consideration of South Coast Leisure’s lease option request; nor to the discount on market value being suggested. “The council will receive a substantial capital receipt once… Read more »
Vote Up00Vote Down
retired Hack

PS: Having re-read the paper for the emergency meeting, especially para 42, I revise my opinion about there being no link.
Can of worms.

If the council does accept SCL’s offer, when next years council tax bill arrives I will make the council a OFFER ALSO. And what to hear from them, but I bet I will get a different answer than SCL.