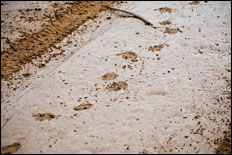 The men had attempted to wade through rain-sodden mud and blue slipper, which enveloped an area of beach at Thorness following a cliff fall. After struggling without success to extract themselves one of them managed to desperately raise the alarm with his mobile phone.

First on the scene with ropes and spades were up to ten members of Needles auxiliary coastguards. After much effort the two men were freed from the mud to then be taken, suffering from hypothermia, aboard Cowes lifeboat which had been alerted by Solent Coastguards.

The men had been trapped for over 40 minutes, and one needed to be stretchered aboard the lifeboat, helmed by Matt Floyd. When the lifeboat reached Shepards Wharf an ambulance was waiting to take them for a check-up at St Mary’s Hospital, Newport.

It appears that the men had come from the mainland to continue their programme of walking in stages around the Isle of Wight. The whole rescue left not only the auxiliary coastguards caked in mud but also the lifeboat, which had to undergo an immediate and extensive clean back at its air berth at Shepards Wharf to ensure it was ready for any other call-out.