Many thanks to VentnorBlog reader pal Leeroy T Mofo for putting together this review of the first Progression Session night for the Blog (particularly during a busy time). You might recognise his name from a piece I put out last year. We hear that the …

Many thanks to VentnorBlog reader pal Leeroy T Mofo for putting together this review of the first Progression Session night for the Blog (particularly during a busy time). You might recognise his name from a piece I put out last year. We hear that the writing is going well and will be the first to let you know when his novel is finished. 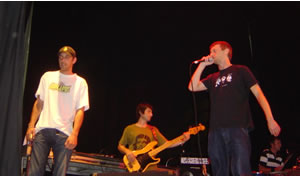 “Council men controlling these lands are corrupt,” observes the Island’s very own Baritone on stage with Cooly Haste, as a hardcore crowd of peers and punters show their support for an artistic collective designed to help local acts progress on a music not profit orientated basis (despite the threatened withdrawal of local authority funding). “Back hand antics, we don’t stand, keep em shut”¦”

It’s no surprise when a local council who proudly committed £35,000 on a text messaging system for bus information, £100,000 a year towards the Island Games (on top of an initial £800,000 commitment) and £750,000 a year on 11 Town Managers come in for some flak inside the only community owned building currently capable of hosting live and local talent. Whether you consider Ryde Theatre’s annual budget (a £25,000 wage subsidy) money well spent (or you think it might be put to better use employing one third of an additional Town Manager) you can understand why frustrations have boiled over and are openly being expressed.

Years of under funding and minimal investment culminated in an emergency meeting being held in Bembridge on 9th July, and – although the decision to retain both Ryde and Shanklin Theatres for another two years was taken in front of a packed and passionate audience – many left wondering exactly what corporate speak such as “Prepare development options and take to the market,” actually meant. 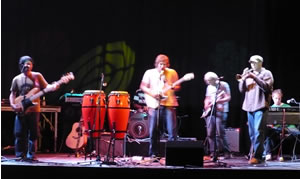 For now a small and dedicated team are surviving on a shoe string at Ryde, and – with the help of outside promoters and local musical activists – things appear to be on the up. A full year of internationally renowned and culturally diverse acts has culminated in the Theatre finally attaining its own PA system again (the last one was sold under previous administration), and – although the monitors are down – tonight’s artists pull through with some style.

The Chancers kick off with “Big Small Things”, and guide us through some of the choicest cuts from their forthcoming first album – “Not For You”, “Sociable Experiment”, and “Monkey” sound polished, if a little restrained by sound testing the new rig. “Temperature Rising” suddenly takes off though as Cooly Haste & Baritone take to the stage, and a storming rendition of Isle of Strut has Island producer Andy Gray wanting to record it straight away.

Cue Cooly Haste and Baritone with a small army of DJ’s and their backline of sonic wizards: all the classic Cooly cuts are there “MC Oceanic’. “Fizzy Logic” and “Snail Trails” soon get the crowd all hailing the Hip Hop hero Haste. But it’s Baritone’s intelligent observations and local wit spat over the licks of ‘Military Industrial’ which show just how an artistic approach can channel impassioned subjects creatively as opposed to destructively, and it’s this which surmises just what the progression sessions are all about.

But they can only progress so far without our help: for the cost of less than a pint we’re blessed with a venue where we can watch our inordinately high number of bands in a chilled atmosphere, and the radio exposure it secures for local acts on IOW Radio is great news too. Tune in on Sunday between 7-10pm if you want to catch the groups, but better yet turn out and help build this event every Thursday.

Just as voting with our feet and attending those meetings in July helped retain the Theatres, continuing to do so by attending their excellent events might just help encourage the Isle Of Wight council to think progressively about the arts as well.

Thanks to The Chancers and Cooly Haste for use of their pictures from the night.

newest oldest most voted
The Piper
This is an extremely interesting piece as gig reviews go – not sure what the IOW Council’s total budget is but it’s certainly in excess of 100M. The writer (and rapper) are quite right to question the Council’s logic behind withdrawing funding for the Theatres and selling them on when it has already commited a far greater amount of money to something as short term as the… Read more »
Vote Up00Vote Down