Inside Outside Artists Moving On

A new exhibition by the No Man is An Island Group opened at Quay Arts last weekend.

A new exhibition opened at the weekend in the Rope Store Gallery at Quay Arts in Newport. 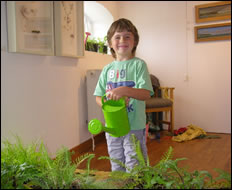 The exhibition titled ‘Inside Outside Artists Moving On’ is the first exhibition in a three year community Arts Project being developed by a community group of artists and craftspeople called No Man is an Island.

It is the culmination of work created by six Island families of artists and craftspeople, who live with autism in their families.

Taking inspiration from the Cultural Olympiad, in September 2008 some of the original families formed No Man is an Island, a community Arts group, to deliver creative opportunities to families living with autism.

Funding and recognition
VentnorBlog readers may remember that the group were awarded funding for a Pilot Project by Awards for All back in February and in April the Project was recognised by the London Organising Committee of the Olympic Games, through the Inspire branding, as being part of the national Cultural Olympiad.

This exhibition marks the start of a three year project which aims to produce an exhibition for London in 2012 including work of families from the South East region, working in collaboration with other community groups across the arts, disability environmental and sporting sectors, including the National Autistic Society.

“It’s been a real triumph for the families to produce this exhibition in such a short time and they’ve worked incredibly hard through the many difficulties we face in our lives. We opened on Saturday 5th September and that marked the start of work we’re developing over the next few years.

“The Project will provide creative ways to explore the relationships we have with different parts of our lives, with our families and communities and with the world we live in. It links the work with themes inspired by nature, elements of our own lives and working together to support everyone to achieve their potential.

“This exhibition marks the start of the journey for No Man is an Island and the artists show work reflecting Project themes and workshop opportunities. We’ll be adding to the exhibition week by week so we hope that visitors will come back to see how the work is growing, and leave their own mark by trying out our ‘Knitting Nancy’!

“Some of the young people have been invited to join other Inspire branded Projects in Southampton, on Tuesday 15th September, to meet Paul Deighton, Chief Executive of the London Organising Committee of the Olympic Games (LOCOG).

Ed Graham, one of the young people taking part in the Project said

“I’ve got to try some things I haven’t done before. It’s been good working with my mates in the Project and I’m looking forward to going to Southampton next week.”

The exhibition runs until 10th October 2009.