Over 4,000 people had already registered to head to Isle of Wight Pride before the line-up was announced. Today, organisers share details of which acts will be entertaining us in July. 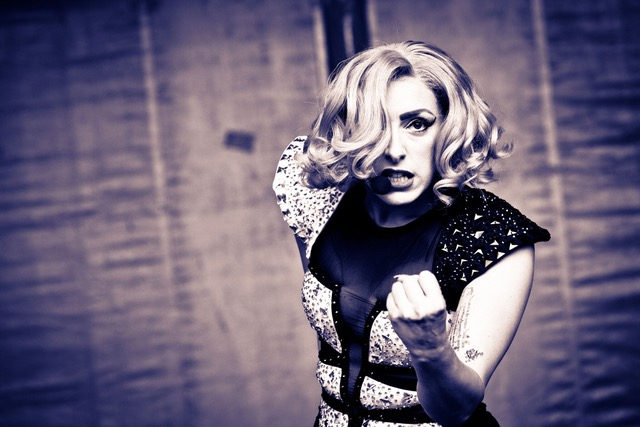 Isle of Wight Pride have announced their line up for UKPRIDE 2018.

Joining firm favourites from 2017, including Miss Jason, Allan Jay and Divalicious Duo will be the likes of Danny Beard from Britain’s Got Talent, Charlie Hides from RuPaul’s Drag Race, and the incredible Spook School from Scotland. There will be some of the UK’s best tribute acts including Lady Gaga (pictured at top), Dolly Parton and Paloma Faith, mixed together with brilliant Island Talent, such as Medina Community Choir and VotePedro. The Pride team are also delighted to be joined by Gok Wan who will be performing a DJ set and also Livin Joy (pictured above), who are best known for fantastic 90s dance classics. There is another surprise act yet to be announced, due to be released later in the year, it will definitely be one to keep an eye out for! The only hint that the Pride team would give, is that it is a winner of Eurovision.

Over 4,000 tickets gone
Yve from Isle of Wight Pride said,

“We are overwhelmed that over 4,000 people have registered to come to Pride already and we haven’t even announced who would be coming to perform yet. Pride is much more than the acts on stage, but we also want to create a special day of celebration that everybody will enjoy and everybody can relate to.

“This year’s Pride event will have various areas that will cater to all tastes, including a cabaret tent, our popular Tea Tent, a disco area, a large Children’s area as well as the main stage on the beach. It will definitely build on the family friendly, inclusive atmosphere from 2017.

“We are delighted that influential speakers such as Peter Tatchell, Caroline Paige, Jacqui Gavin, representatives from Stonewall and AllOut will be joining us as well as many Unions and public sector organisations such as the Tri-Services, Police and Fire Brigade, to march and take part in the Pride event.”

“Pride is delighted with the diverse line up that we have organised for this year. This was really important to make sure that there is something to cater to everybody’s tastes whilst also being fully reflective of all sectors of society. We are keeping our big headline act under wraps until June.

“With so many tickets already gone, we want to ensure that everybody has the opportunity to register (for free) to come to our gorgeous Beach Pride.”

Get your tickets
Tickets are available now on the Isle of Wight Pride Website.

Donations towards the event are gratefully received and helps to maintain Pride as a fully inclusive, accessible event.