Kingston Marine Park: Funding due to be agreed

The council say that infrastructure funding will help attract private sector investment – and estimates it could “eventually create around 550 long-term jobs and 20 during the construction phases”. 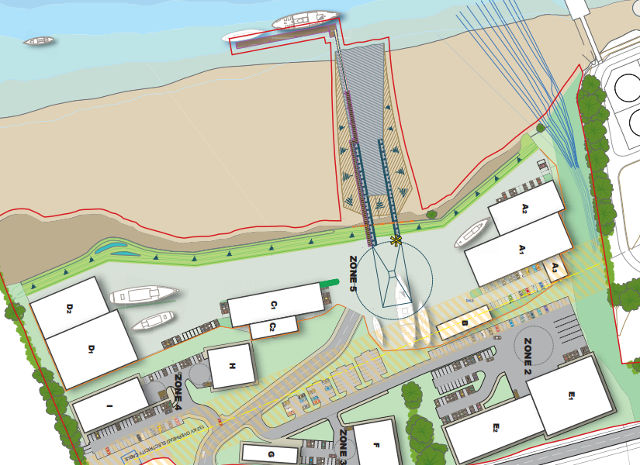 A major step forward is to be taken next week towards the creation and safeguarding of key marine jobs in the Medina Valley – with Kingston Marine Park, East Cowes the preferred site.

The Isle of Wight Council Cabinet is due to give the green light on Thursday (15 February) to assembling a public and private sector funding package for the 14.5 acre waterside location.

The council is currently in the final stages of buying the site from Homes England – and has commissioned a full financial appraisal for its development.

The council is also investing £1.8 million over the next three years for the provision of infrastructure to unlock the development of other sites – which could create 550 jobs.

“We are committed to investing in the Island’s long-term economic future, and protecting and building our marine sector is a major pillar of our regeneration strategy.

“The primary site option for this is Kingston Marine Park, which would allow the relocation of marine industries from Cowes harbour.”

What to expect
The development would be expected to offer infrastructure – including a hoist dock and further site works – for businesses that construct vessels equivalent in size to the new Red Jet 6 or next generation wind farm support vessels.

“We are determined to create a climate where businesses can thrive – and at Kingston Marine Park we aim to fully explore the viability of developing the site in the best possible way. We are also working on the provision of other sites in the Medina Valley to help accommodate further growth in this vital part of our economy.

“Our long-term commitment to the Island’s economic growth is clearly demonstrated in our budget proposals for 2018/19, where we have also set aside £700,000 for infrastructure works to unlock other Island sites, building to £1.8 million over three years.”

550 long-term jobs
The infrastructure funding will help attract private sector investment – and it is estimated it could eventually create around 550 long-term jobs and 20 during the construction phases.

The council’s capital investments for regeneration also include £750,000 in 2019/20 to attract match funding to refurbish its building next to Bae Systems at Cowes. This would provide space for start-ups to grow the Island’s technology sector and further develop the ‘innovation isle’ reputation.

Full details in the Cabinet report below.