The two new appointments come at a time of investment for the Isle of Wight bus operator – with a new fleet of vehicles due soon. 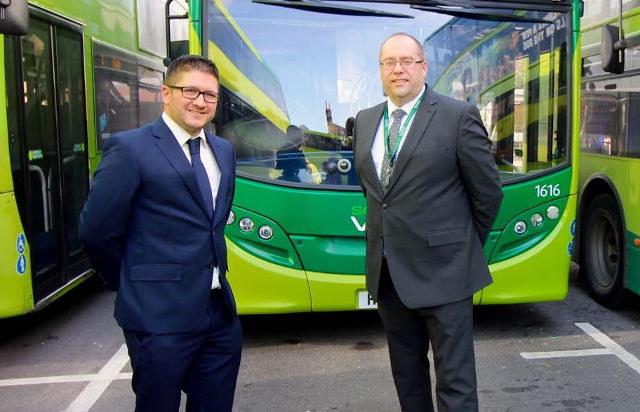 Southern Vectis is continuing to invest in its people with the appointment of a new operations management team.

Their appointments come at a time of investment for the Isle of Wight bus operator – with a new fleet of vehicles due to arrive in the coming weeks.

Before joining Southern Vectis in 2007, Simon Moye worked as a manager within the retail and hospitality sectors.

“I first came to work with Southern Vectis as a driver.

“After that, I became a relief controller and later added to my duties by gaining experience as allocator – covering holidays and busy periods. In April 2016, I was appointed assistant operations manager, and now am delighted to be continuing my career here as operations manager.”

First joined SV in 1999
Colleague Ben Bartram joined Southern Vectis straight from school in 1999 – working as a timetable assistant until 2001. He later worked as traffic assistant, responsible for staff allocation and duty creation, until 2007.

“Afterwards I took to the roads as a network bus driver, and then as a coach driver until taking a supervisory role in our private hire and schools team.

“Later I became private hire and schools coordinator, before taking on my most recent role here.

“The time Southern Vectis has invested in me early on in my career quite simply set me up for life in the bus industry, and I’m relishing the opportunity to help ensure our services across the island run like clockwork.”

“We are committed to investing in and developing our own team, by providing them with everything they need to succeed within this excellent industry.

“Both Simon and Ben are highly experienced professionals, and I’m delighted we are continuing to benefit from their skills as they take on senior roles within our operations management team.”