Now planning permission has been secured for St George’s Park, work on the WightFibre Park – located at the top of The Racecourse – can begin 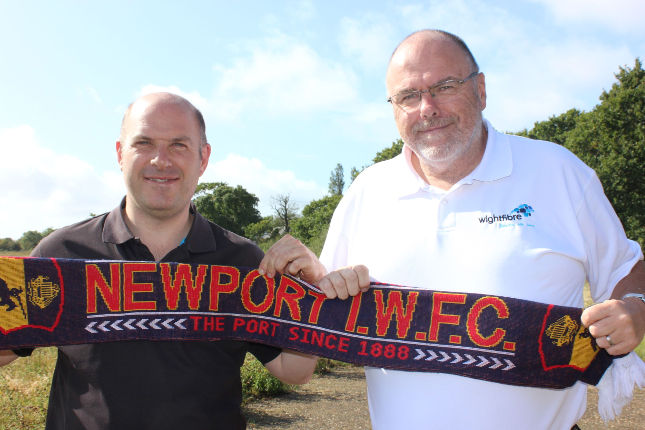 The stadium is also the new home of Newport Football Club.

Variety of uses
There is already interest in developing women’s and junior football at the new stadium while the IW College and the Island’s public health service are also looking to use the facility for sports coaching courses and to encourage participation in football and other activities as a means of staying healthy.

Irvine: Will be a real hub
Announcing the provisional sponsorship of the new stadium, WightFibre chief executive John Irvine said:

“As a local Island company, WightFibre cares deeply about giving back to the Island. We are proud to put our name to what will be a fabulous, new, sporting venue that will benefit our Island community”

“WightFibre Park will be a real hub bringing together people of all abilities and uniting them in the name of sport.”

New clubhouse
WightFibre Park’s new club house will have space for public and business use including a conference/function room to host community, private and business events on non-match days.

There is also a disabled/vulnerable persons viewing room intended for use by families and individuals from local disability and age charities along with Mountbatten.

“As a business that is all about connecting people, WightFibre is the perfect company to partner us in what we are trying to achieve.

“Our vision is to establish Newport FC as a club at the very heart of the community and we know that Wightfibre have similar values. As well as being a home that the club can be proud of, WightFibre Park will be a vibrant venue based around healthy activity that the whole community can be part of and benefit from.

“Inclusive community uses include child and under 16’s football while we also have interest from local physical and learning disabilities clubs and charities while Newport FC will itself be coaching at least four disabled football teams. There are local football clubs looking to use the facility as well as schools and 5-a-side football teams.

“We are looking also to set up a female 5-a-side league in the first season and hope to grow this into at least one, if not two, full-size ladies teams in the second season.

“We really are excited about creating a community sporting hub and we are thrilled to have WightFibre on board as an important part of the team.”

More about 3G pitches
A spokesperson for WightFibre added,

“3G artificial grass pitches are durable, safe, year-round playing surfaces, able to withstand intensive use in weather which means more people can benefit from the social and health benefits of physical activity. They are extensively used around the world including in the UK and on the Island.

“Numerous independent scientific studies have found a very low/negligible level of concern for human health as a result of 3G pitches and their use of rubber crumb which keep grass upright and provides extra protection for pitch users.

“For example, the European Chemicals Agency (ECHA) has recently published its own findings, following an extensive EU-wide study which found no reason to advise against playing sport on 3G pitches with rubber crumb.”

In addition, FIFA has also confirmed their position on this matter and state that:

“While it will never be possible to exclude risk completely or prove this negative, the newer studies have confirmed the previous findings that there is no evidence of a link between contracting cancer and playing on artificial turf with SBR infill.

“The Sport and Play Contractors Association (SAPCA), the UK trade body for the sports pitch industry, has developed an industry standard that will go above and beyond what is currently required for rubber crumb under European regulation.”

They say these standards will be met in delivering the facilities at WightFibre Park.