Would Portsmouth’s chargeable clean air zone have an impact on you or your business?

Plans for a chargeable Clean Air Zone in Portsmouth have been taken to the next stage. Would the introduction of charges affect you or your business? 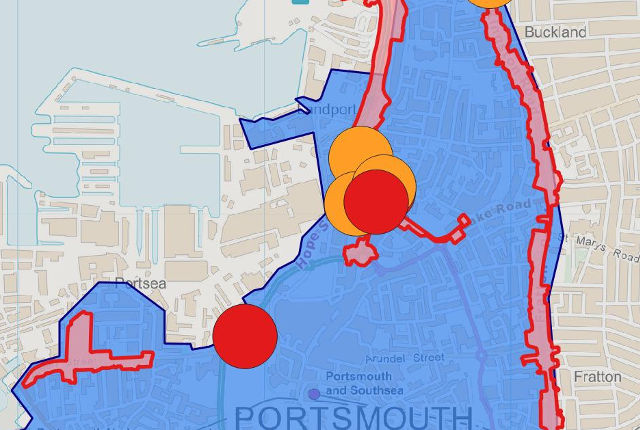 The class B zone (see map below) will affect coaches, heavy goods vehicles (HGVs) and taxis that are not compliant (euro 4 emission petrol vehicles and euro 6 diesel vehicles).

What’s next?
Government will now consider the Clean Air Zone plans, which will be followed by a 12-week consultation to take place next year.

“At present the zone is modelled based on all Class B vehicles (HGV, Bus, Taxis) that travel into and out of the zone. Once the approach is approved by Government we will carry out a full consultation with affected people on the Isle of Wight and in Portsmouth.

“Based on this there may be some exemptions, however we can only exempt vehicles if we still achieve compliance in the same timescale.

“During the consultation we will also look at the timings of the zone, so there are still some specifics we will be investigating further.”

“Wightlink doesn’t have hard data on how many class B lorries are not Euro 6 or Euro 4 as this is known only to the operators of those vehicles.

“Wightlink believes that traffic to and from the Isle of Wight should be excluded from any charging system and has already made representations to Portsmouth City Council for exemptions should the charge go ahead. This is because such a charge would unfairly disadvantage Isle of Wight business and consumers.

“Charging coaches to drive through the city would also increase costs for their operators who would then need to charge higher fares.

“If a Clean Air Zone was imposed, lorry drivers may well take longer routes to avoid the charge, resulting in greater emissions both on the Island and on the mainland.

“Wightlink will continue to make representations for exemptions to the City Council during the consultation period next year.”

4 Comments on "Would Portsmouth’s chargeable clean air zone have an impact on you or your business?"

newest oldest most voted
Angela Hewitt
There is no need for Portsmouth City Council to be so heavy handed. All new vehicles are environmentally friendly so all vehicle replacements will eventually come into play. This requires a pragmatic approach. Of course all companies selling the new eco vehicles be pleased as punch that their profits will suddenly soar or not as companies go out of business and unemployment increases because they can’t afford… Read more »
Vote Up5-3Vote Down
hialtitude
We all have to breathe the air, this charge will be an incentive for vehicles arriving on the Island to be as environmentally friendly as possible and also for Islanders to update their older trucks with newer versions. WightLink want to impress us with their eco credentials, witness the words ‘hybrid energy’ on the new Victoria ferry, but it seems this desire envaporates at the waters edge.… Read more »
Vote Up12-16Vote Down
prof
More likely the affected vehicles will just use Red Funnel leading to a loss of the commercial business Wightlink rely on to survive meaning that they go bust. Most companies operate older vehicles because they cannot afford newer ones. Increasing costs will just drive them elsewhere. For coaches, of course, this may well be the final straw that makes the hassle of getting to the island just… Read more »
Vote Up11-4Vote Down
hialtitude
Southampton also has plans to introduce clean air zones, so I imagine similar air quality restrictions will emerge shortly. Your notions that Islanders should be subjected to poor air quality merely to ensure Wightlink makes a profit and visitors should be allowed to visit in polluting vehicles to aide tourism I find depressing, we should be setting standards and reducing for air pollution alongside our mainland neighbours.… Read more »
Vote Up8-10Vote Down