The Isle of Wight council said challenging Southern Water was the responsibility of its regulators, Ofwat, who have said Southern Water’s standards fell below those of other sewerage companies. 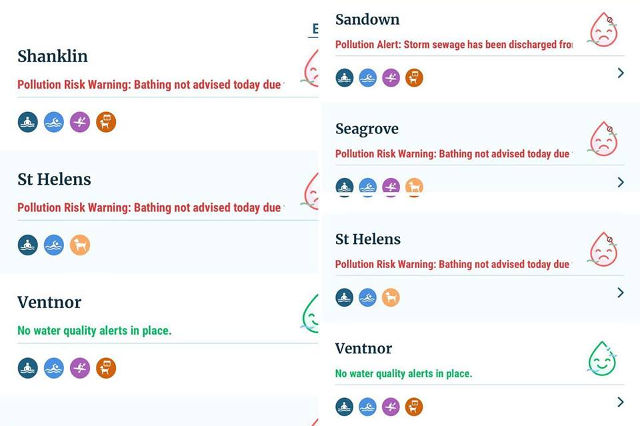 Southern Water’s infrastructure has been branded inadequate by regulators, as Isle of Wight surfers complain beaches ‘reek of sewage’ leave them ‘nauseous and dizzy.’

In the past 30 days there have been 15 instances of increased risk of water pollution due to heavy rain on the Island — in Shanklin, St Helens, Seagrove, Ryde, Cowes and Gurnard — according to the Environment Agency.

Heavy rain can lead to wastewater entering the sea, as more water arrives in sewers than can be processed.

Excess water is stored in large tanks, but when these fill up wastewater is filtered and released.

The wastewater is often from washing machines, showers and dishwashers, diluted by rain and run-off water from roads and land.

“As soon as we get heavy rainfall, water is discharged. A lot of it gets treated but what they haven’t got at the moment is the facilities to deal with the amount of water.

“We have got an increase in population and more surface run-off. They are not putting the infrastructure in place to deal with the increase in water run off.”

It said storm tanks were too small, equipment was not properly maintained and there was a lack of capital investment.

Millions invested
Southern Water said it has invested millions in its wastewater network in recent years, including a £4 million project in Shanklin which includes installing a new storm tank.

Ofwat will soon release its final decision on what action will be taken against Southern Water for ‘significant breaches of its licence conditions and its statutory duties.’

The campaign has encouraged recycling, binning litter and dog mess, and not flushing wet wipes, cotton buds or grease down drains.

It also suggested following the ‘if it’s yellow, let it mellow; if it’s brown, flush it down’ rule.

“I think it’s really good that the council sees this as an important issue, but where is the challenging of Southern Water?

“We all pay and the two things we expect from our water company is clean water through the taps, and knowing dirty water is disposed of properly.

“Unless you have very, very extreme weather, this should not be happening.”

The council said challenging Southern Water was the responsibility of its regulators, and the council’s campaign was about doing simple, everyday things to keep the coastline clean.

newest oldest most voted
confidential
Southern Water is a monopoly so we have no choice, unlike every other service. On the island Southern Water continue to operate Victorian sewerage systems with Combined Sewage Outfalls which discharge raw sewage into our rivers, estuaries, and seafronts and that is a disgrace. All this is caused because Southern Water refuse to invest in better systems to cope with the population which has increased dramatically over… Read more »
Vote Up31-3Vote Down
Colin
“never been cleaner”? The rubbish that the IWC comes out with beggars belief. Perhaps the IWC needs to realise that the electorate aren’t thick and not all of us believe the tosh they come out with. We have had a few days of rain, well below average this year and the system cannot cope. And the IWC wants to build more houses on the Island when the… Read more »
Vote Up260Vote Down
sandancer
I believe that NO MORE NEW HOUSING DEVELOPMENTS should be allowed to happen or given permission on the Isle of Wight until Southern Water has modernised the combined sewerage system here. They are asked for their opinion for every new site and their ‘stock answer’ is that there is capacity in the system. It has now been stated by Ofwat that the Southern Water infrastructure on the… Read more »
Vote Up18-2Vote Down
sandancer

If, by any small chance, there has been an improvement in the water quality as the state, it is certainly not by any efforts of the Isle of Wight Council but by the efforts of other groups like Surfers Against Sewage, FAECES and individuals doing their job for them.

Surely we must have the option to withhold the ‘waste water’ tariff on Southern Water’s bills given the manifest failings they have.