One shopper had a nasty surprise when she returned to her car in Sainsbury’s on Saturday morning.

On Saturday morning a regular shopper at Sainsbury’s in Newport came home with more than she’d intended. 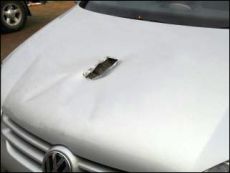 Caroline Bolton was happily doing her weekly shopping in the Newport supermarket, oblivious to what was going on out in the car park.

We’re told by Caroline’s daughter, Louise, that men working on the Sainsbury’s development, “dropped a large piece of metal (something to do with lighting) off the top level of the car park onto the bonnet. It also hit another shopper’s car. The workmen showed no remorse for what they’d done and a passer-by had to go and report it, as the workman did not.”

Could have been fatal
Louise went on, “If my mum had been getting in or out of the car it could have hit her. You can see the extent of the damage, so I don’t even want to think of what could have happened to her.”

As you can see from the photo right and below. The damage to the car bonnet is pretty serious and as Louise says, if it had hit a person, goodness only knows what kind of story this might’ve been. 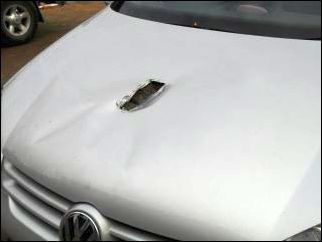 Why are Sainsbury shoppers exposed to danger?
Louise, obviously upset by the incident, finished by saying, “Sainsbury’s should NOT be open if there is even the slightest risk of this kind of thing happening.”

Louise told us that despite the seriousness of the incident, they still hadn’t heard back from Sainsbury’s management. Police advised the Boltons to get in touch with the Health and Safety Executive.

We’re getting in touch with Sainsbury’s to ask why Sainsbury shoppers are being exposed to this danger during the construction of the enlarged shop. We will, of course, let you know what they say.

I find it incredible that customers are being put at risk. Surely the store should be closed during the construction of the mega-store?

I take it that Caroline will be making a claim against Sainsbury’s for the damage and distress caused? Also the HSE should be investigating.

I’d imagine she’d claim on her own insurance, wouldn’t she? That’s what you generally do when your car is damaged in an accident.

But, yes, perhaps the store should be closed if there’s a safety risk.

And risk loosing you NCB or a hike in premium? under these circumstances, it should be easy obtaining satisfaction direct form Sainsbury’s without going through your insurance.

You show always inform your insurance company of an accident whether you claim from them or not!

By not doing so, could invalidate any future claims

Vote Up00Vote Down
Sailor Sam
@ ‘sheila’s wheels’, If it had been a road traffic accident then I would agree with you. But this wasn’t. Insurers will increase premiums when the policy holder has been involved in a ‘road traffic accident’ because they argue that they see the policy holder as being a ‘higher risk’ of having further accidents for some reason, whether they are to blame or not. Unless Caroline’s policy… Read more »
Vote Up00Vote Down
Sailor Sam

…or even professional advice!

As I mentioned in response to the tongue-in-cheek Tesco piece, I’m avoiding Sainsbury’s – I hate the extension they’re building. So oppressive and ugly, a far cry from the original “bird’s wing” architecture they originally built (and even that was controversial at the time).
Caroline’s experience sounds awful.
I’m using the Co-op more, plus independent shops and farm shops – we’ve got some fantastic produce available on the island.

If the HSE does its job properly, they will close the area. Trying to park your car in Sainsburys is a nightmare; avoiding customers, barriers, workmen and now falling materials. It’s a building site – members of the public would not be allowed to walk around a normal building site. I’ve stopping shopping there because it’s just too stressful!

I went shopping there last Friday night. Because people are staying away either due to the building work or the long queues at the temporary traffic lights, it was lovely and quiet inside. Got my shopping done much more quickly than I thought I would.

I used to shop at sainsburys all the time, i just avoid it now, its manic and dangerous!, they should close it when major construction is taking place, but of course they are clearly to greedy for that.

From the pic it looks like the object has pierced the bonnet skin, thats quite an impact for that to happen! Could easily have killed someone. Hope the HSE come down just as hard on the contractor.

A large number of the public have falling in love with supermarkets although sadly these huge companies have destroyed most of the local shops including butchers, fruit and veg shops, fishmongers, grocery stores and many others.

Perhaps this accident is a sign of early wear and tear to the cheap, huge and horrible looking buildings supermarkets have become.

Vote Up00Vote Down
Caulky
When the HSE pays a visit they should take a walk around the store as well, it has been like a horror show for years now especially in the evenings. They stack tins of sweets above the freezers there are pallets blocking the aisles and clutter everywhere. The new car park structure looks abysmal and completely blocks the view of the store which is now unrecognisable from… Read more »
Vote Up00Vote Down
Farmer Palmer

With that big hole in the middle , I’d say it’s a Volkswagen Polo !

I order on-line get all my shopping delivered from Sainsbury’s, Tesco or Waitrose (whichever has the best deal on at the time). That saves having to go to the actual shop at all. It also saves me having to carry it anywhere.

What about the attitude of the workmene and their “SUPERVISORS”? who it would appear did nothing about this serious incident. A sign of the times me thinks !!!
What’ the world coming to.

At one time they would have immediatwely apologised and the store sound system would have asked the owner of the vehicle to go to reception.

i say throw the book at Sainsburys and the construction company.

Vote Up00Vote Down
had enough
well sainsburys have never really cared about people only insofar as how much money they can extort out of them but certainly not their safety. They don’t care about bees either, having initially wanting to plant 4 trees that are toxic to bees It took a few years worth of accidents on the bridge before they would do anything about the safety of it and they only… Read more »
Vote Up00Vote Down