Following his hugely successful gig in 2007 at Ryde Theatre, Errol Linton returns to the Wight in March, this time gracing the stage at the Ventnor Winter Gardens.
Yes folks, one of the UK’s leading bluesmen will be headlining the fifth annual Spring Blues concert, on …

Following his hugely successful gig in 2007 at Ryde Theatre, Errol Linton returns to the Wight in March, this time gracing the stage at the Ventnor Winter Gardens. 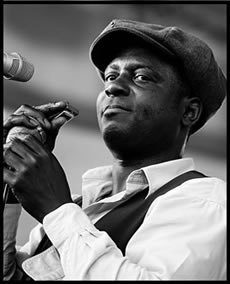 Yes folks, one of the UK’s leading bluesmen will be headlining the fifth annual Spring Blues concert, on Saturday 21st March.

Accompanied by double bass, guitar, piano and drums, his blues is raw and bloody, an urban sound with rural roots. The Blues Vibe is one of the most real, unpretentious down home blues bands around. Moving effortlessly from Chicago Shuffle to Kingston Skank without missing a beat, they have gained an unrivalled live reputation in the regular London Blues circuit.

Errol’s first album “Vibing It” secured regular airplay and a session for BBC Radio 2 Paul Jones Blues Show, airplay from Bob Harris, Johnny Walker, and a host of independent radio station Blues shows. He is established as a firm fixture on the UK and European Blues Festival and Club Circuit. In the words of the late John Walters “Errol is as good a Harmonica player as anyone can reasonably hope to become, he is the real Deal”.

His latest album, “Roots Stew” shows Linton’s song writing developing alongside the band’s organic blues-reggae groove. The album has quickly picked up some glowing reviews, and is currently being showcased wherever the band plays.

‘You haven’t lived till you’ve heard the dub version of Howlin’ Wolf'”¦.MOJO MAGAZINE.

If you like to boogie, Errol Linton’s Blues Band is a must!

Also on the bill are The Amen Boogie Blues Band.

A local band who, while gigging the IOW pub circuit during the last 10 years, have built a reputation as one of the Island’s top blues acts performing blues standards by the likes of Muddy Waters, Son House, Elmore James, John Mayall and The Blues Band.

Don’t forget to say where you heard about it.

I saw him at the venue and he is good. Well he is one of the UK’s finest blues harmonica/singers. His backing artists are equally as good, so this is your chance to see one of our finest, can’t wait.

Looking forward to a great night of blues/R&B tomorrow night with a 3 band line-up headlined by the superb Errol Linton.
Get your dancing shoes on!

Really looking forward to this. Saw Errol Linton when he was at Ryde Theatre a couple of years ago and he and the band were amazing. Great night out.