Residents fed up with regular power cuts at St Catherine’s Point will be pleased to hear that SSE plan significant investment to strengthen and maintain the network in their area.

Earlier in the week Alan Limb a resident on the South of the Isle of Wight got in touch to ask for VB’s help. 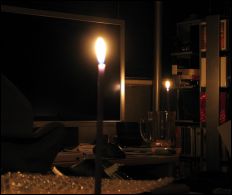 Alan explained that regular and lengthy power cuts have been experienced by seventeen homes immediately surrounding the lighthouse at St Catherine’s Point.

On each occasion, he said, the Scottish & Southern Electric (SSE) linemen do a good job of restoring the power, although sometimes residents suffer reduced supplies on emergency generators for a few days.

Major investment needed
Alan and his neighbours have become increasingly concerned at the frequency of the power cuts, believing that a major investment in infrastructure is required to avoid future power cuts and expensive emergency repairs.Some believe that the existing cable was installed in 1946. They feel it is capable of coping with the significantly increased demand that has cropped up from the properties surrounding the lighthouse since installation.

Impact on the frail and elderly
As you can imagine, like many Islanders, they rely on continuous electricity for heating, lighting, cooking and washing.

“The power cuts affect us all,” said Alan, “but in an area that is regularly battered by gale force winds, their impact is greater on my neighbours who are frail and elderly.”

We got in touch with SSE to find out why the cuts in electricity were so regular and whether they were planning investment to upgrade the infrastructure in the area.

Fault identified on the high voltage network
Hannah Gleave, spokesperson for Southern Electric Power Distribution told VB, “We would like to apologise to the residents for the recent power interruptions at St Catherine’s Point.

“An underground cable fault has been identified on our High Voltage (HV) network. As a temporary measure, and because our network is so flexible, we have managed to re-route the customers electricity supply to avoid further disruption.”

Multi thousand pound investment planned
Luckily for the residents of St Catherine’s Point, she went on to say, “In the long term, an investment project worth tens of thousands of pounds has been developed for the area which will strengthen and maintain the electricity network and ensure a reliable supply.”

Residents, we’re sure would be keen to know when the investment will be made. SSE tell us that “the investment project is part of our development plan for the near future, but it’s early days. We don’t have a specific timescale or dates at this moment in time.”

Parish council active involvement
Alan tells us that the Parish Council have been quite active in ensuring a speedy resolution to the problems.

They’ve given permission for SSE to erect a pad-mounted substation on land at the lower end of Dock Lane. This will enable the problematic high voltage overhead cable to be replaced. It’s thought that SSE will also be replacing the low voltage cable which runs down Dock Lane underground.

New steps on Dock Lane path
Vickie Ford, the clerk for Niton Parish Council said, “In order for the work to proceed as quickly as possible, the Parish Council has signed Heads of Agreement to allow the substation to be installed before the legalities of the lease have been finalised. No planning permission is required.

“As a gesture of goodwill, SSEPD has agreed to form two small steps at the bottom of the Dock Lane path to allow easier access to pedestrians.”

Good news all round then!

Image: Glen Bowman under CC BY 2.0

I didn’t know they had electricity there in the first place!

Really VB, “fed up of!” I thought you were better at English than that.

My smiles were for Alan.
And ‘well done kid’ to Sally. That’s what happens when you ‘burn the midnight oil’ !

We all love you for it.