The Ancient Craft Of Hedgelaying In The 21st Century

You will remember that we got very excited about the recent Hedgelaying competition in Blackwater. It might not be very ‘street’, but without skills like this on the Island, our environment could end up looking very different – imagine all those hedges, which provide homes …

You will remember that we got very excited about the recent Hedgelaying competition in Blackwater. It might not be very ‘street’, but without skills like this on the Island, our environment could end up looking very different – imagine all those hedges, which provide homes for wonderful wildlife, all gone and bog standard fences in their place. Well, one of the contestants, Oz Hoskyns, who took third place in the competition and trains hedgelaying to the amateur enthusiast through his business Hobbit House, has very kindly agreed to write a piece for the blog … and here it follows. 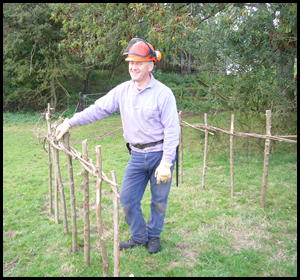 Hedgerows all over the South Wight are suffering from benign neglect.

Landowners and farmers do not have the inclination nor the cash to manage their field boundaries in the traditional way. Hedges have been allowed to grow on up and up with the occasional drastic bashing by a flail. The result is lines of gappy trees which are not stock proof and provide limited habitat value for wildlife.

The answer? Hedgelaying. This is the traditional way of managing our beautiful hedgerows and was practiced for hundreds of years before barbed wire fencing was invented.

It is an ancient craft that anyone can learn. It can be utilised in the garden on a short stretch of plants as well as the usual line of field hedge. No specialised tools are required. It costs nothing. It provides a dense, safe habitat for small birds to nest and voles to have their holes. AND, as we are a tourist area, it is a feature of our landscape.

In the South Wight we are blessed with a number of talented hedge layers, or cutters. The recently held Isle of Wight hedgelaying competition held at the top of Blackwater Shute was won by Godshill resident Dick Poleyne who lays hedges professionally.

The principles of the craft are very simple:
Clear out all the rubbish from the hedge including bramble and elder. This will leave you the exposed stems of the overgrown hedge.

Cut away the branches on the side that will be nearer the ground when laid, then cut through the stem on the opposite side near the base. Cut about three quarters of the way through or until the stem (which we now call a pleacher) becomes wibbly wobbly.
Lay the pleacher gently on the line of the hedge.

If the laid hedge is going to be buffeted by the wind or pushed against by animals then it needs some sort of support until the first years regrowth gives it strength. Traditionally in the Isle of Wight we put in ‘crooks’ which are wooden staples created from the brash we have taken out of the hedge. The South of England stile is to put stakes in and bind the tops together with thin intertwined hazel rods.

One can be as arty crafty as one wants but as long as the hedge has been laid over at an angle of about 30 degrees and it ends up about three foot six inches then the jobs a good’un and the hedge will regenerate. The secret then is to manage it so that it does not become leggy and over grown again. But that is another article.

If you want to learn the basic principles of hedgelaying and make a difference to the wildlife and scenery of the South Wight then contact Oswald Hoskyns of Hobbit House on 731514.

newest oldest most voted
Glen Taylor
Thanks for the simple guidelines. V. useful. I have some laying to do but it is probably too late in the year now to start. However I am still trying to find a website that shows the right tools for the job. Does one need a billhook and/or a slasher or would a decent machete do? If so what length and or weight? Would a small axe… Read more »
Vote Up00Vote Down