With all quiet on the public front over the last few months as far as Ventbag has been concerned, we were pleased to receive this update over the weekend below from the Ventbag team. Ed
Ventbag is the project name for Ventnor becoming the first town …

With all quiet on the public front over the last few months as far as Ventbag has been concerned, we were pleased to receive this update over the weekend below from the Ventbag team. Ed 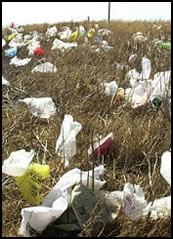 Ventbag is the project name for Ventnor becoming the first town on the Island to be Plastic Carrier Bag Free.

This unpaid volunteer project is supported both by Ventnor Town Council and the Isle of Wight Council.

As we set an original (tough target) of achieving this in September this year, we thought it would be a good idea to give everyone an update on progress.

The biggest challenge we faced was looking at the production of an alternative bag for Ventnor. This was planned to be an organic fair trade sourced cotton bag.

The problem has been one of the costs of raw materials increasing continually, which have made this idea unworkable. This is a global problem, not one unique to the Isle of Wight!

We have spent a considerable amount of time talking to both shopkeepers, residents in the town and visitors. One consistent piece of feedback is that almost everyone we speak to says going plastic carrier bag free is a great idea “¦ but also says that is only going to happen when there are alternative choices.

Our focus for this year has been to make that happen. To that end we have coordinated the creation and handing out of over 1000 Morsbags and over 500 bag kits (these are carrier bags made from unwanted fabric). We have also just launched an initiative with the County Press to turn unsold copies of the newspaper into carrier bags.

We know that over 90% of Ventnor business and shops now actively discourage the use of plastic carrier bags. Several shops now openly sell alternative bags, and have reported that a large number of shoppers do not want or ask for a plastic carrier bag. More recently Somerfield has asked its staff to take an active role in this.

This has all happened over a period of nine months.

While it has seemed to be a quiet project, we have been just getting on with our project’s objectives which are to inform, educate and explain the benefits of going plastic carrier bag free.

Most folks we encounter are very positive about the subtle and yet profound changes we have seen in Ventnor since the beginning of this year.

As with all change projects though, the old saying of “you can take a horse to water, but you can’t make it drink” holds true!

newest oldest most voted
chickenbento
I’ve lived in Japan for the past 6 years and most of the supermarkets in this country have implemented what they call a “my-bag” system whereby the customer places a card in their shopping basket when they arrive at the checkout which saves the employee having to ask each customer whether or not they need a carrier bag . In most cases you get a few pence… Read more »
Vote Up00Vote Down
Simon Perry

Great insight into another culture – Thanks chickenbento.