Looks like Vestas are planning to ship their blades from Newport tomorrow.

News has reached us here at VB that it looks highly likely that Vestas Blades will attempt to ship the remaining wind turbine blades from their Newport plant tomorrow. 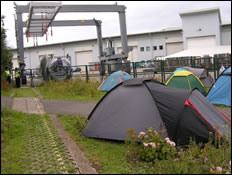 A sharp-eyed follower of movements at the plant called VB to let us know this evening that according to the excellent Area Ship Traffic Website, AIS, two barges under the agent NEG Micron Rotors Ltd (former owners of Vestas’ factory) are due to head to the wharf at St Cross Business Centre at around 7.30-8am tomorrow.

As previously reported, the blades can only be transferred from the riverside to barge when it’s high tide and across a public footpath. It’s thought that there will be an opportunity for the blades to be moved between about 9:30am and 2:30pm tomorrow (Friday 4th).

Protesters are asking supporters to join them at Marine Gate on the River Medina tomorrow morning.

Thanks to Jackie for the heads-up.

newest oldest most voted
URGENT: Attempt to move the blades likely at Vestas tomorrow, Friday, 4 September « Save Vestas jobs! Save the planet!

[…] VentnorBlog for happening news including link to a very detailed shipping […]

Looking at Under Shipping & Movements: Arrivals.

So does that mean they have left Cowes but now gone back to Southampton, The ship has now vanished off the map of ships. Strange

[…] Last week, using the Area Ship Traffic Website, AIS, VB was able to report where two barges held by an agent – NEGÂ  Micron Rotors – who used to own the Vestas’ factory were due to head. They would be used to move the blades from the factory, which are so huge that they can only travel away on the water on special vessels. […]