We Love ‘We Love Libraries’ (video)

Fantastic film says it all

As readers will be well aware, the Isle of Wight council propose to close nine of our eleven libraries. This action, termed by many as ‘cultural vandalism’, is also happening across the UK. 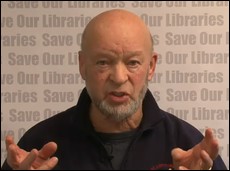 Many thanks to Kevin Redpath for pointing us to this brilliant film made in support of the Friends of Somerset’s Libraries.

The Friends Somerset’s Libraries are a coalition of library campaigners in the West of England with media support from the Friends of Glastonbury Library & the Friends of Shepton Mallet Library.

Passionate responses
The film is full of passionate messages by library users and authors, directed to councillors and politicians responsible for making the choices later this month on closures.

The scrolling list of libraries threatened with closure across the UK at the end of the film is hugely shocking.

If you’re watching at work, be aware there are a couple of incidents of mild swearing, as those against the closures express their anger.

3 Comments on "We Love ‘We Love Libraries’ (video)"

newest oldest most voted
keithybaby
A powerful film, poignant to see Island libraries listed in the end credits as being amongst those proposed for closure. I liked the point made by one member of the public that further education was no longer free and that libraries were now the route to free further education for all. About time the IWC did some impact assessments on the loss to communities and individuals of… Read more »
Vote Up00Vote Down
carol

A valuable comment made in the excellent Somerset film “If you can’t understand how important libraries are you shouldn’t be representing us.”
Remind your councillor of this, please

At the end of this brilliant film it is so sad to see the Isle of Wight mentioned so many times.