Those who drive diesel cars and like to do their part to save the planet and save some cash might be interested to hear about a company called Wight Made Bio Diesel.
They’ve been running a pilot project over the last year re-cycling used cooking oil …

Those who drive diesel cars and like to do their part to save the planet and save some cash might be interested to hear about a company called Wight Made Bio Diesel. 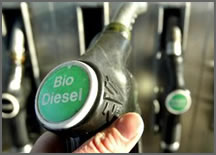 They’ve been running a pilot project over the last year re-cycling used cooking oil into bio-diesel. If you’re scratching your noggin and saying “bio-what?”, bio-diesel is diesel-equivalent processed fuel, which contains vegetable oils or animal fats.

The fuel they create is environmentally friendly, producing little or no Carbon Dioxide or Suplhur Dioxide. In fact for every one tonne of Bio-Diesel used in place of ordinary diesel, three tonnes of carbon dioxide emissions are saved. Sounds pretty good to us.

After the initial pilot, Wight Made Bio Diesel are keen to expand but face the problem of getting hold of cooking oil in the quantities needed.

Most businesses (such as restaurants or pubs) are either charged to have it taken away or the naughty ones dispose of it unsafely. The good news is that Wight Made Bio Diesel are licensed both to collect the oil (which they do free of charge) and process it.

At the moment they produce about 700 litres per week of bio-diesel, which is mostly sold to a few IW based hauliers and is usually delivered to their premises.

What they are hoping be up and running in their new premises in Cowes by early March but, to be able to offer the sale of bio-diesel to private customers either from their site or by delivery, they need to massively increase the amount of used cooking oil that they collect.

If you run a business that generates lots of cooking oil and would like to do your bit for sustainability, then get in touch with the lads at Wight Made Bio Diesel by emailing them on wmbd(at)hotmail(dot)co(dot)uk Don’t forget to keep a lid on the oil though, to avoid water diluting the oil and rendering it useless.

hi what a great idea we drove to norwich on veg oil for Â£8 both ways and it was fine goes like a dream .

Can you tel me how much per lt it is thanks

Hi is bio diesel safe to use? The company I work for have completely banned its use in any of their fleet vehicles, not sure why …

Vote Up00Vote Down
Wight Made Bio-Diesel

Bio-Diesel is safe but it is always worth checking that the fuel conforms to the relevant European standards.

If your engine is still under warranty then it is also worth checking what blend the manufacturer will allow. Most allow up to 30% bio-diesel.

Shell, BP etc. spend big money on developing fuels to get maximum mpg, power and cause least wear to engines. Diesel engines are sophisticated pieces of equipment. Okay, you might save a few bob to start with, but the cost of any repairs would be enormous.

Vote Up00Vote Down
Wight Made Bio-Diesel
There is no evidence of Bio-Diesel (that conform to the relevant standards) causing additional wear to engines. Many users claim that their vehicles run more smoothly on bio-diesel than on petroleum-diesel. Porsche undertook a study that actually determined that the use of bio-diesel reduced long term engine wear. Other studies have also found similar results. Some of our existing customers only use bio-diesel blended with petro-diesel whilst… Read more »
Vote Up00Vote Down
Dave Simon

The Transition Island community action initiative would love this project to work.

The Island has a significant tourist industry: hotels could improve their own green credentials AND help the local economy by supplying old cooking oils. Schools & College could help too, demonstrating action in line with theory to students.

Cool, I like the sound of this. Do you need to modify the engine to run on biodiesel? And, what are the duty implications? I read somewhere that if you use any biofuel and use less than 2500ltrs per year you dont need to pay duty on it now – well, from June 2007, is that right?

Vote Up00Vote Down
Graeme Hawksley
I use 100% WMBD in my experimental marine hybrid system, it works great. In discussions with Ricardo (major engine design consultants) they think that with a naturally aspirated, indirect injection, marine diesel there should be no problems using a 100% mix. On problem you man encounter when converting is that bio-diesel is a good solvent and will clean out dirty diesel fuel pipes. This dirt can get… Read more »
Vote Up00Vote Down
andrew younie

how can i contact you if i wanted to purchase this

Vote Up00Vote Down
Scott Newman
I’ve been looking into making bio-diesel for about five years now and have never had the space, time, money to get up and running, so I’m glad to find somewhere that i can purchase bio-diesel from ( saving at least 20p a litre) and save myself the frustration of not being able to do my bit. I’m surprised at how ignorant a lot of people are of… Read more »
Vote Up00Vote Down
Dave Billington
Am just about 3/4 thru my first tank of bio diesel and have used it in my wife’s 1985 Shogun which has done 150,000 miles and has just sailed thru it’s MOT, I am waiting for the print out of the gunge coming out of the exhaust and am assured that it will be practically zero. It would be nice if they would tax according to your… Read more »
Vote Up00Vote Down
fat boy fat

Where can you buy bio-diesel on the i.o.w?

Wight Made Bio-diesel can be found off Arctic Road. Cowes. Call them on 282022.

Thanks scott for the info,filled up today with my 1st tankfull the people down at artic road are friendly and what a brillant idea useing waste oil to power your car!!!If you work or live in Newport its not to much trouble to get there.Well done wight Bio diesel

Just thought Geoff, Jan 15th, 2008 might like to check these two pages out. I’m sure they would delight in hearing his worldly knowledge of the “dangers” of bio-diesel. ;OP

Have now been using 100% biodiesel for 3 months and have had no problems (touch wood)I have told all my friends about it and they are all happy especially about saving 20p off each litre plus the “greeness” we save by using biodiesel.
Dave of Wight, Cowes.

were can I buy biodeisel on the Island???

Wight Made Bio-diesel can be found off Arctic Road. Cowes. Just inside the entrance of the grain storage depot. Call Naren on 07775871697. They produce top quality (N Power approved) fuel. W.M.B-D. are totally honest, and above board…as well as being a nice bunch of people

Is anyone using biodiesel on a Landcruiser HSJ80?

Vote Up00Vote Down
wolf of shanklin

i got a vauxhall vivaro 1.9 tdci and ran on biodiesel 4 circa 40 weeks qn 100% no probs at all, when are u wake up diesel driver,we have a say in our country “trying it goes over studdy “so go+ get it and be not influenced by bad press. sorry if my english is not perfect, be blessed

Vote Up00Vote Down
Scott Newman
A note to all the Bio-phobes out there. If in doubt about running your vehicle on biodiesel ask someone in the trade (check earlier postings). There’s a lot of bad press about alternative fuels but then what do you expect when there’s billions of pounds at stake in this modern fuel-fired economy. Chris and Naren are very knowledgeable and their fuel has been tested (and passed) by… Read more »
Vote Up00Vote Down
steve