Rachel reviews The Black Cat and Top Hat show held at The Tap in Sandown between Christmas and New Year. Hosted by Nick Painless and featuring Mr Strange and Ravenna Grimm. 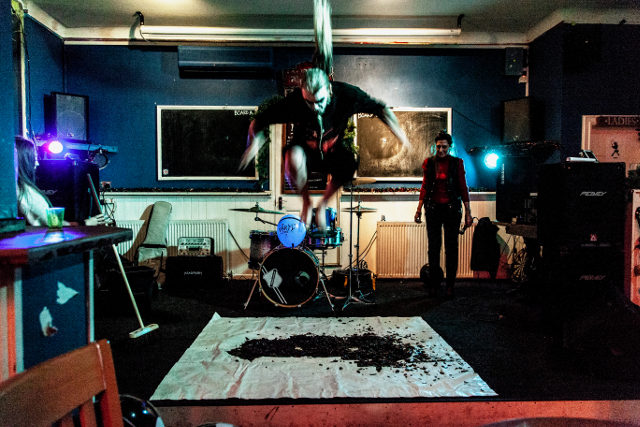 Nick Painless’ Black Cat and Top Hat events are always fun and a little bit naughty! Heavily pierced Painless with his blacked out eyes and spooky white stage make up is a pure entertainer and he loves a crowd. He created a feel good factor throughout the night and his humour and banter had the audience in hysterics.

The enigmatic and mysterious Mr Strange
Isle of Wight band Mr Strange are seriously on fire at the moment, with a year that has seen them headlining gigs and alternative festivals on the mainland.

Fronted by the enigmatic and mysterious Mr Strange – formerly of The Shanklin Freakshow – his beautiful yet eery make up and persona is alluring and captivating. He’s an exciting front man like a gothic cartoon character and you can’t take your eyes off him. Songs like the funky ‘Psycho Surfing-A-Go-Go! had people up on their feet and dancing away to the beat of Mr Stirling’s thunderous drumming.

Fan favourite ‘Lizard Man’, from independent horror film ‘Talon Falls’ had everyone singing along and the band finished their set with their spectacular yet surreal cover of Adam Ant’s ‘Xerox Machine’ Mr Strange are creating a big name for themselves with their unique electro rock sound and surreal image. With the buzz surrounding them at alternative events on the mainland, definitely catch them on the Island when you can.

Known for her enchanting hoop routine, petite Ravenna performed on a chair to Imelda May’s ‘Wicked Way’. She received rapturous applause and cheering as she deliciously disrobed from her figure hugging, red evening dress and seductively removed her satin, elbow length gloves. Ravenna ended her performance by revealing her devilishly cute tail which had been surprisingly hidden under her dress.

Top show from Nick Painless
Star of the night was undoubtedly Nick Painless. As well as expertly and hilariously compering, he performed his own Organ Grinder variety act between the other artists.

He walked back and forth and jumped up and down on crushed glass whilst the squeamish crowd gasped in shock! Later, he lay on a bed of nails and a member of the audience was invited to stand on a block of nails on his bare chest! Ouch!

More fun in February
Look out for the next fun and enthralling Black Cat and Top Hat at The Tap on Saturday 23rd February.

Images: © With kind permission of Nick Painless and Allan Marsh